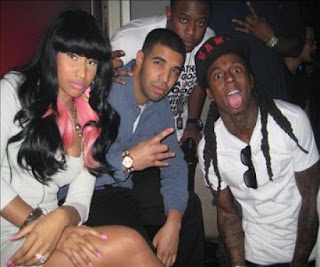 “Man fuck ya’ll with a sick dick
Semi automatic no click click, we don’t feel you
Like an elephant, getting fucked with a tick dick
Little nigga with a thick bitch, and before I fuck this bitch
“Go stupid, go stupid, go stupid…”
Lil Wayne, ‘My Homies Still’, 2012
*
“Well, Mr. Black Man tell me where you’re heading
The last few years I watched while you were shedding
Pounds and pounds of growth off the population
Soon we won’t be able to have a strong black nation
“It’s not a white man’s finger on the trigger
Car-jacks, drive-by’s, callin’ each other “nigga”
I’m not here to scold but rather shape and mold
A young black mind that won’t live to grow old.”
Nonchalant ‘Five O Clock’ (1995)
http://www.youtube.com/watch?v=XijhkfZqfj0
*
“Drop it the floor make that dick shake
My home girls slurp it like a milk shake
All you niggas want some Nick cake
If you eat ass I got a thick plate.”
Nikki Minaj, ‘Mercy’, 2012
“Pardon me, mister warden, I’m askin for a pass
To comfort some of my brothers who made mistakes in the past
It’s really not their fault, you see times are hard
And it was probably difficult for my man to find a job
Before he was forced, forced to make a living
By lying, stealing, and eventually killing
No one was born bad, we’re all God’s Kids
So who’s to really blame for the wrong that he did?
And speakin about the law, what are they for?
To beat us with a stick face down on the floor?
You preach and you preach that you want crime to stop
If you want crime to stop, stop hiring crooked cops.”
Heavy D & The Boyz, ‘Peaceful Journey’ (1991)
http://www.youtube.com/watch?v=-7gG0i2Ncn0
*
“Ass ass ass ass ass ass ass
Ass ass ass ass ass ass ass
Ass ass ass ass ass ass ass
Stop… now make that motherfucker hammer time like
Go stupid, Go stupid, Go stupid
Wobble-dy wobble-dy wa wobble wobble.”
Big Sean Feat. Nikki Minaj ‘Ass’ (2012)
“No need for me to run away, brother put the gun away
You wanna take my life away as if we were in combat
You can buy some new Adidas but you can’t buy my life back
Aiyyo whassup with that? Why is it like that?
Let’s stand together y’all… and fight that in our race
To replace waste with a taste, just in case
you can’t face the place that you’ve been put in
If you was my kid, for what you did you’d have a foot in
right in your ass, another term’s rectum
Kids are having kids, they’re not parents so they let them
do things that shouldn’t be done
You’re not a father cause you got a son unless you’re taking care of him’
Edo G & The Bulldogs, ‘I Got Ta Have It’ (1991)
http://www.youtube.com/watch?v=yrdzedMx1rk