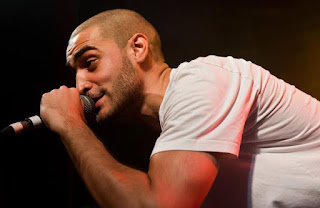 Returning to tour after a four-year hiatus – one of which was spent on activist work in Palestine – the biggest question about Lowkey’s series of comeback gigs was whether his time away would have affected his draw in the fast-moving world of hip-hop, or whether he remains the type of artist whose distinctive persona commands a loyal fanbase no matter the time between shows.

The answer to the question had already been provided on arrival at the grim brick warehouse that is the Rainbow, as a crowd, at least 80 per cent Asian, snaked around the block in one of Birmingham’s old industrial areas. Once inside, it was live performances all the way, minus any fill-in DJ, as support acts Crazy Haze, Awate and Mic Righteous all delivered politically-motivated sets, the latter displaying all the charisma and crowd-control of a headline act, and drawing roars of applause every time he dropped a dope verse.

By this point the crowd were nicely primed for the main man, as Lowkey took to the stage greeted by a sea of waving arms, launching immediately into a high-energy intro, with Awate now settling into the role of his DJ. There were heavily truncated versions of a few favourites, notably ‘Terrorist’ and ‘Voices Of The Voiceless’ (minus Immortal Technique.) Collaborators were brought on-stage for others, however, including a couple of female vocalists for a solemn rendition of ‘Children Of Diaspora’, the return of Mic Righteous for ‘Revolution’, and a surprise cameo from Black The Ripper specifically to deliver his verse on ‘Obama Nation’, a stinging attack on the outgoing US president and the legacy of death and destruction he leaves in his wake.

Of Lowkey’s political sentiments, he remains best known for his support for the people of Palestine, and his contempt for the Zionist regime of Israel, and there was no sign of this flame of passion having burned out, with his anthemic ‘Long Live Palestine’ gaining cheers of support. The evening ended on another downtempo reflective note, with the new song ‘Ahmed,’ a bitter ode to the Syrian refugee crisis.

Tonight confirmed one thing at least – Lowkey’s fanbase certainly hasn’t waned during his hiatus – at least not in Birmingham.