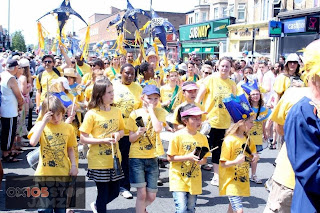 Amidst some of the most baking Summer weather we ever get to see in England, July saw the relocation of OX105FM’s studios from its original home on Blackbird Leys, to right in the hustle and bustle of cosmopolitan Cowley Road in Oxford. Each week the new studios, housed in a former Estate Agents, grew from a hollow shell, to a fully functional set-up with a big window facing the street, so passers-by can wave, gesticulate or moon at the on-air presenters as they see fit. I continue to present my show, The Sound Of Now, on Saturdays from 6-8pm, and I’m still loving the discipline of sifting through hordes of new music each week to come up with two hours of the real gems. I publish the playlists and Listen Again downloads as soon as available, and the latest is always posted at:
http://www.soundcloud.com/djmarkdevlin 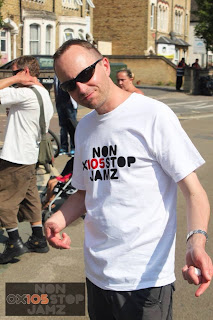 After occupying our new home for only days, we had the advent of Cowley Road Carnival on Sunday 7th July. This is Oxford’s version of Notting Hill, with costumes, food and sound systems to match. For this, the station broadcast live all day from a rig directly outside our studios, with Matty & Harry, Digital Beat Geekz, DJ AC’s Elements Of House, 2Xclusive, White Magic and Dan Gill all putting in sets in the scorching heat. I delivered mine from 2-3pm, and loved the al fresco experience. I couldn’t decide whether to drop old-school urban anthems, or soulful house classics … so I opted for both!  You can listen back to the audio of my set here:
And there’s some great photos that really capture the atmosphere of the day here: 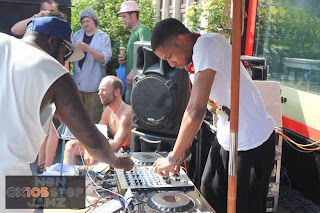 A couple of days later, it was time for the first of my two annual pilgrimages to Ibiza. I’ve now been spinning at Soul City, still the island’s leading venue for black/ urban party music despite no end of (failed) competition, for ten years, and still love the buzz. Due to the usual rubbish flight times, I headed out very late in the day on Tuesday 9th from Gatwick, lading shortly before 1am, and grabbing a cab straight over to San Antonio’s notorious West End. Playing alongside veteran DJ Horse this year is DJ Policy, whose mic and deck presence is truly energising. This guy is gassed!  The Soul City atmosphere always brings out the hungry ambition in me, and inspires me to really dig deep in my selections and fire the tunes out at a furious pace. This always goes down well with the crowd – especially the line of girls guaranteed to be dancing on the bar all night. On this occasion, the antics have to be seen to be believed. I’ll leave Policy’s Youtube videos to tell the full story. They come with an 18 Certificate. 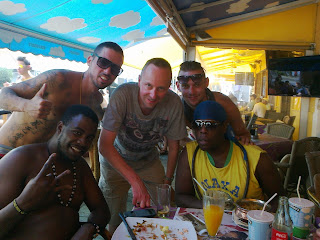 With the full 6am experience under my belt, I grabbed some sleep at the Playa Bella apartments on the other side of San An Bay, (via a water taxi) before linking with Policy, Horse, Lucas and Natasha of Soul City staff for a big meal at La Cantina. This was at 4pm, which counts as breakfast time for Ibiza DJs. On Wednesday night it was back to Soul City for Round Two, this time with a highly civilised finish time of 3.30am, owing to my flight home being just six hours later.
Soul City is always a blast, and the spot remains the original venue of choice for fans of the music. I put together an article on this year’s shenanigans for Black Sheep Mag, which you can check here:
While the pics are here:
Outside of DJ realms and into my ‘other’ work then, it’s been another active month for my Good Vibrations podcast series, which continues to offer discussion on all manner of alternative subject matter you can never hope to hear about in the mainstream media. This month’s volumes have included a chat with Lara Starr, about out-of-body experiences and spiritual, other-worldly matters, and a very popular interview with the colourful blogger Chris Spivey. In this, he goes into fine detail concerning the many, many discrepancies in the official story of the Woolwich/ Lee Rigby incident, explaining why he’s convinced beyond all doubt that the event was a staged hoax using actors. The podcast accompanies his marathon 30,000-word article on the whole fiasco which you can read at:
http://www.chrisspivey.co.uk/?p=13030
The podcast can be heard and downloaded here:
It’s controversial for sure, but we absolutely should not shy away from asking pertinent questions when there’s any possibility that we’re being lied to, no matter who might get upset. When official stories just don’t make sense, (as they rarely do,) we’re well within our rights to hold the detail of what we’re told up to valid scrutiny. 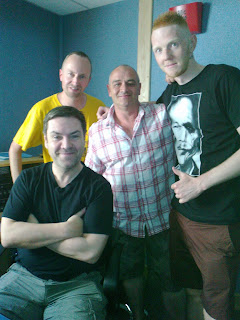 On Sunday 14th July, I headed up to the studios in Wigan where the crew behind the brilliant Planet X Radio record their weekly show, with my mate RP, aka Ritchie Paul of the 2Xclusive DJ collective with me for the road trip. I linked with Neal Atkinson and the crew to record a show dealing with a wide variety of subjects (as ever,) but loosely based around the matter of sound frequencies and vibrations. The main guest was the US music-maker Geoff Byrd, on the line from Portland, Oregon, who had some fascinating insights, then went on to amaze everyone with his accounts of how to build Orgonite devices to combat the negative energetic effects of Chemtrails and EMF pollution. You can listen back to what was a show full of really great information here:
Meanwhile, there’s some further wise words for humanity from Geoff, a really great guy, right here: 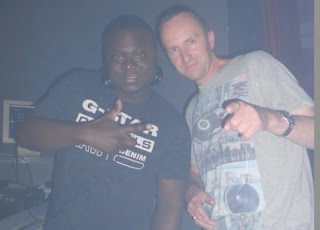 Right – back to being a DJ!  Saturday 20th saw me undertaking a long road haul to Scotland, to spin at Mask nightclub in Aberdeen. To combat travel costs, I trekked up by Megabus all the way from Birmingham. In the time taken, nine hours, I could have flown to Las Vegas or Mumbai!  The gig was alongside local hero DJ Kojo Odk, and it was clear to see that the largely African crowd were relying on heavy does of Afrobeats and reggae dancehall to keep them moving. Mercifully, Aberdeen was basking in a mild 19 degrees or so, which offered a brief respite from the blazing inferno of further south. Job done, I downed a hearty breakfast on Sunday, before heading back, this time with the luxury of a flight (delayed, though) between Glasgow and Birmingham to avoid some of the motorway miles. 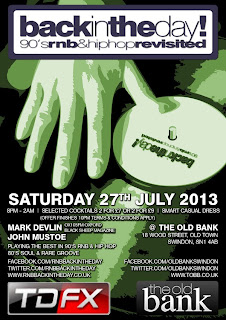 Any opportunity to play 80s and 90s soulful grooves to a clued-up crowd – especially at peaktime on a Saturday night – is always a good look. Straight after my radio show on Saturday 27th, I hot-tailed it to Swindon, throwing down at the latest session of Back In The Day at The Old Bank alongside resident John Mustoe. BITD never disappoints, and I relished the challenge of digging deep into the hip-hop soul, new jack swing and soulful groove archives, with very satisfying results. Straight after that, I ventured further up the M4 to Portishead, where I had a Travelodge booked for around four meagre hours of sleep, ready to move on to Glastonbury in the morning. 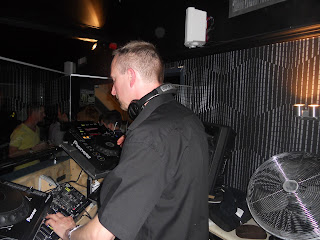 The Glastonbury Symposium takes place on the last weekend of each July in the Town Hall, and features a host of speakers addressing all manner of issues loosely falling into the spiritual/ esoteric/ truth/ consciousness fields. Sunday’s subject matter ranged
from the possible extra-terrestrial origins of Silbury Hill in Wiltshire, to the mysterious Bosnian pyramids. My only slight issue with the Symposium is that so many of the ‘love and light’ type speakers, while making valuable contributions on the spiritual and inspirational front, just don’t seem to acknowledge the existence of a long-standing global agenda to enslave and manipulate humanity, a situation which is not only patently the case, but which ain’t going to get any better until everyone comes together to face up to the challenges!  Anyway, this minor gripe aside, it was another inspiring event, and Glastonbury High Street, with its fascinating array of boutique shops, is quite unlike anywhere else.