Each of my various activities from in the music/ alternative/ truth scenes has been reflected in the last month. With the school Summer holidays now fully in effect, August may not be quite as productive, but at least a lot’s been done in the past 31 days!
I’ll start off by tying my three ongoing audio projects together. Firstly, The Sound Of Now continues each Saturday as my weekly radio show on Destiny 105 in Oxford. Preparing for this keeps me disciplined in staying on top of the huge volume of new music I get sent, and sifting through the dross to identify the good stuff. It’s no quick task, and if I ever go just one day without vigilantly managing my e-mails it becomes almost impossible to get back on track. The resulting two-hour selection consists of the very best stuff that I’m happy to provide an outlet for, and typically encompasses uptempo styles such as garage, soulful and deep house and melodic D&B, alongside the heavy hip hop and soulful grooves. You wouldn’t know it from listening to mainstream TV or radio, but hip hop is still a healthy, creative genre that continues to push boundaries. You just need to know where to look to find the nuggets. Anyway, the show airs 6 to 8pm GMT on Saturdays, and I upload as many recordings as I’m able to get, along with the full playlist, to my Soundcloud page at:
http://www.soundcloud.com/mark-devlin

Similarly-named, but different in nature, is The Sound Of Freedom, which I now put out as a fortnightly podcast exclusive to my Soundcloud and Mixcloud. This continues to showcase music old and new that articulates so much of what’s on people’s minds currently in the truth/ conspiracy/ spirituality fields. Conscious music is the catch-all term that I use. Listening to these tracks puts you into the mindset of the artists concerned, and you realise they’re on the same page as so many of us on so many things. Putting this together and being alert to appropriate tunes to feature – particularly for the Truth Trip revival sequence – is another hugely rewarding process. The latest instalments, volumes 23 and 24, can be heard and downloaded right here: 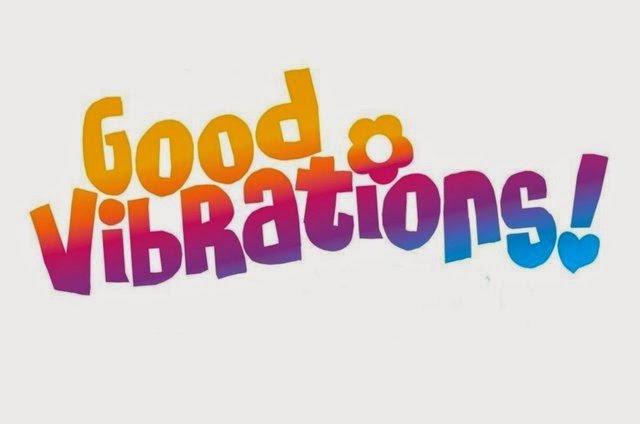 Last up is my Good Vibrations series of podcasts, which cover the same diversity of subject matter as TSOF, but in conversation form. Volume 43 saw me chatting with US author and researcher Dave McGowan about the strange business of the Laurel Canyon district of LA, and the massive number of key artists from the late 60s hippie era that emerged out of there. McGowan’s research into the backgrounds of the artists reveals that almost without exception, they came from families connected to the US military, intelligence, or government complex, which raises the startling question of whether the counter-culture movement was as grass roots and organic that legend would have us believe, or whether it could have been a cynically manipulated scene from the start, for the purposes of mass mind control and social conditioning.
Then for volume 44, I chatted with Irish researcher, author, activist and satirist Thomas Sheridan. I felt the time had come to address the issue of in-fighting and lack of unity within the so called ‘truth movement’, with finger-pointing and dismissal of anyone who doesn’t share an opinion as a ‘shill’ or government agent at an all-time high. In a month which also saw the final death throes of The People’s Voice leaving so many unanswered questions, we get into that. Russell Brand gets an airing too. This volume’s been a particularly popular one, having been shared around far and wide:
On to other matters then, and Wednesday 2nd July saw me headed up to Hull to deliver a talk to the Truth Juice gathering there. Truth Juice is a franchise of regional meet-up groups which host different guest speakers, with the subject areas similar to those covered on Good Vibrations. This was the last of my presentations on the Mind Control Manipulations of the Mainstream Music Industry before the big one at Glastonbury later in the month, so I used it to unveil some new material for the first time. Of the various regional talks I’ve done, Hull was one of the best attended, and I was hugely impressed by the number of everyday folk in attendance who so ‘get it’ about so many things, in a way so called ‘academic’ types just don’t seem to be able to grasp. Hats off to Catherine for running a brilliant event. 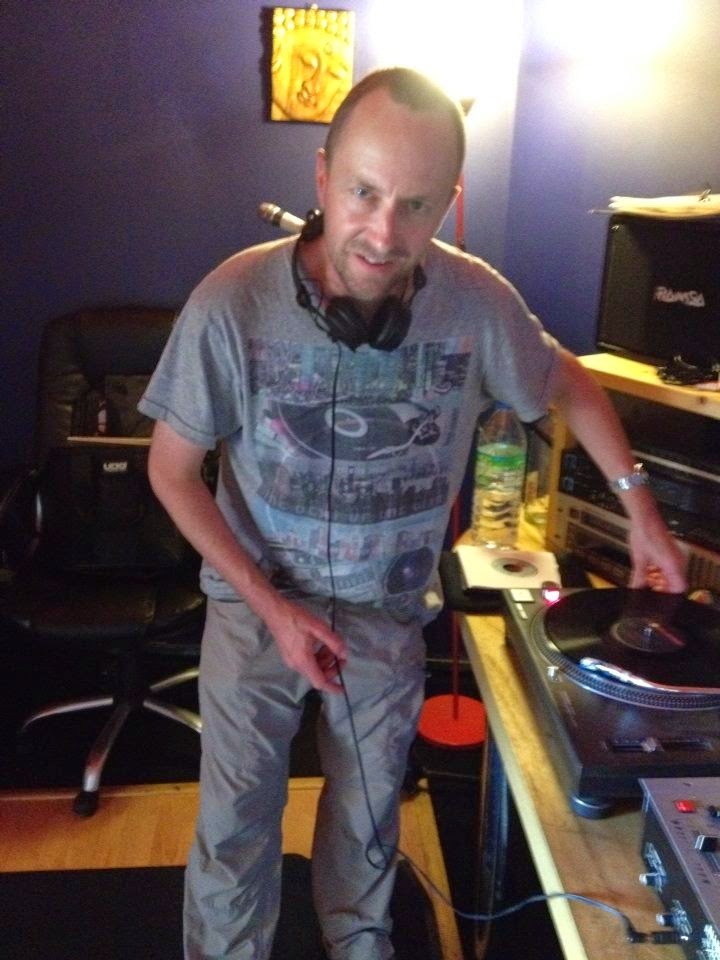 On Saturday 12th I headed into the radio early, as Danny Prince, the dude whose show precedes mine, had invited me to cover an hour of his show as he was away at a wedding. Danny’s show is all-vinyl, and showcases his impeccable taste as a soulful connoisseur. I think of him part Gilles Peterson, part John Peel!  In keeping with the show’s essence, I played a selection of cool, soulful gems from over the years that I was very pleased with. Sadly due to tedious technical issues, no recording exists of the show.
The following week I was back as Danny’s live guest where I threw down a live mix of 80s soul, funk and electro nuggets. This time it was all off vinyl, and working the turntables in the baking hot studio brought back so many memories of how it all used to be done!  Happily I grabbed a recording of this one, and you can check the playlist and hear the results right here:
And so, on to the annual jaunt to Soul City, Ibiza. Each Summer since 2003 I’ve headed out to what still remains the island’s leading spot for urban/ black music in all its forms, delivered in wild party style seven nights a week. The Ryanair flight out of Stansted was hardly a refined, civilised affair, with idiots, oafs and neanderthals climbing over seats, running down the aisles and draining the bar dry … and that was just the girls. Once touched down at 9pm, I grabbed a taxi across to San Antonio, seized the air-con remote control in my room at the Costa Mar apartments, and grabbed a disco nap ahead of the night’s shenanigans. By 1am, I’d navigated the heaving mass that is San An’s West End, and reached the familiar sight of Soul City boss Julian outside the venue, surveying his empire like a jungle lion. 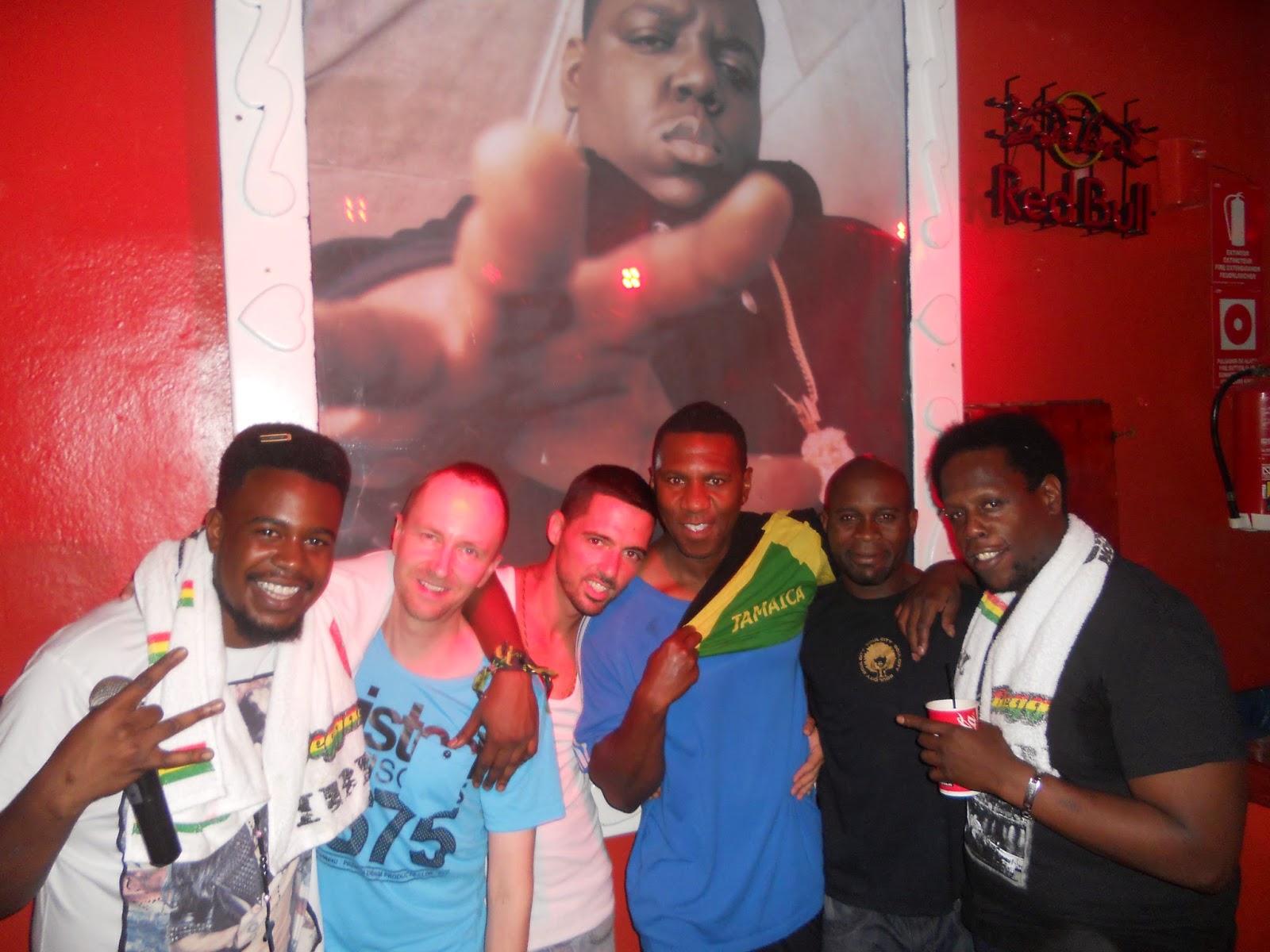 Tuesday 15th had a DJ line-up akin to a festival. Residents Horse, Policy and Uch all juggled deck time, and also in the house was DJ Killa Kutz with whom I played my very first SC gig. I jumped on for a couple of hours, resolved to keep up the pace that Policy and Uch had created, and pulling a few tricks out of the bag. The lights came on at 5.30am, with another hugely satisfying session in the bag. 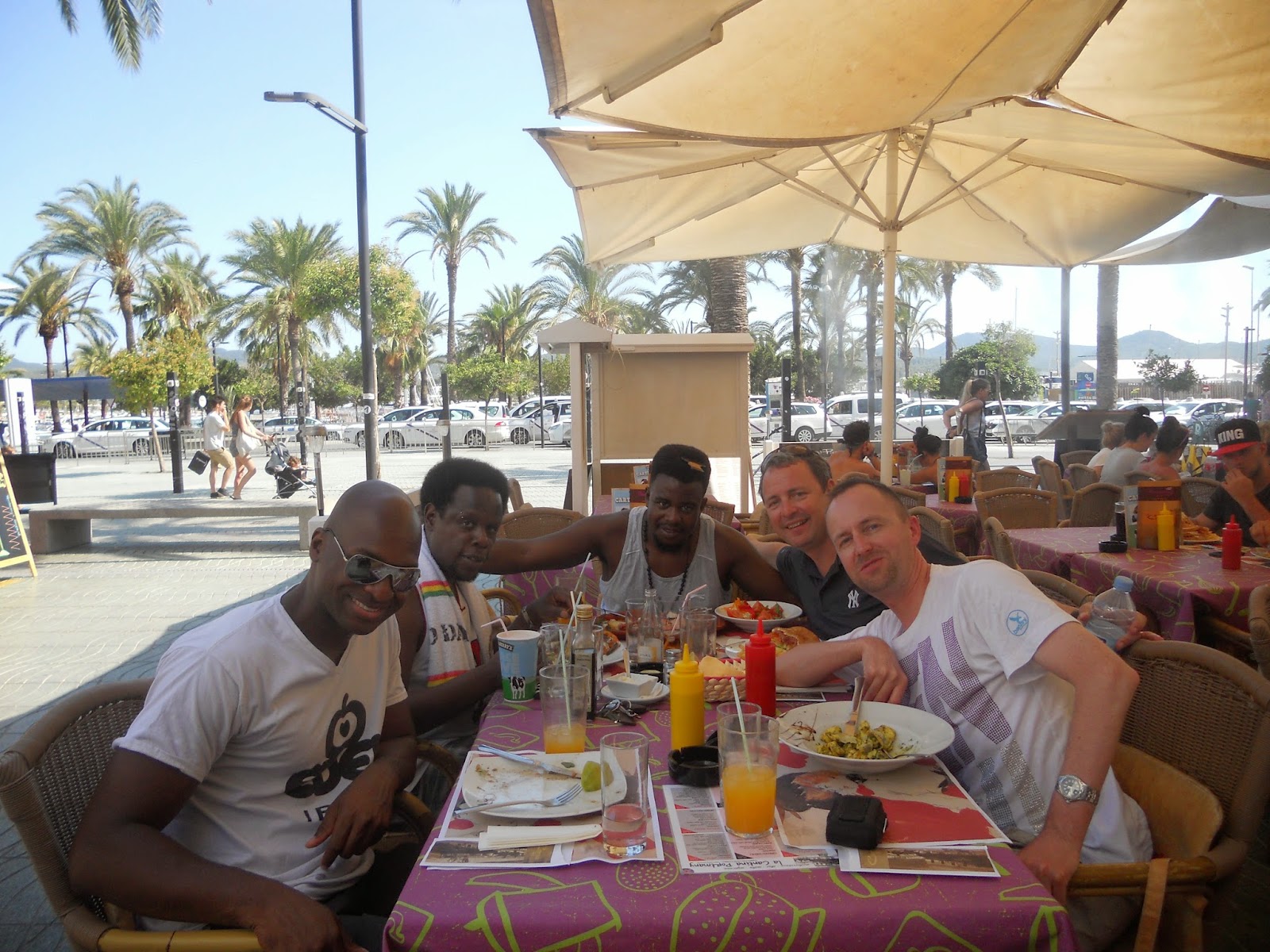 Sleep time is a lottery for me, and I didn’t fare too well on my first morning, being fully awake by 10.30am. Later in the day, Julian hosted a Soul City DJs dinner at La Cantina, al fresco style, giving a good opportunity for everyone to talk without screaming over the music. Later on Wednesday night, I headed back for a second night of SC action, just as manic as the first. Ibiza is now my longest-standing regular gig and remains an essential part of the annual diary.  Looking forward to another piece of action there in September. In the meantime, here’s the resulting review I put together for Black Sheep Magazine:
http://www.blacksheepmag.com/reviews/live-reviews/item/4207-soul-city
The last weekend in July saw what I think of as a kind of Southport Weekender of the truth/ alternative scene – The Glastonbury Symposium. There are many parallels – three days of action, a packed schedule of top-quality guests, and the chance to mingle with a huge bunch of like-minded people. For the past couple of years I’ve just attended the Sunday, but this time was in for a full weekend. Also for the first time, I’d been invited to speak. 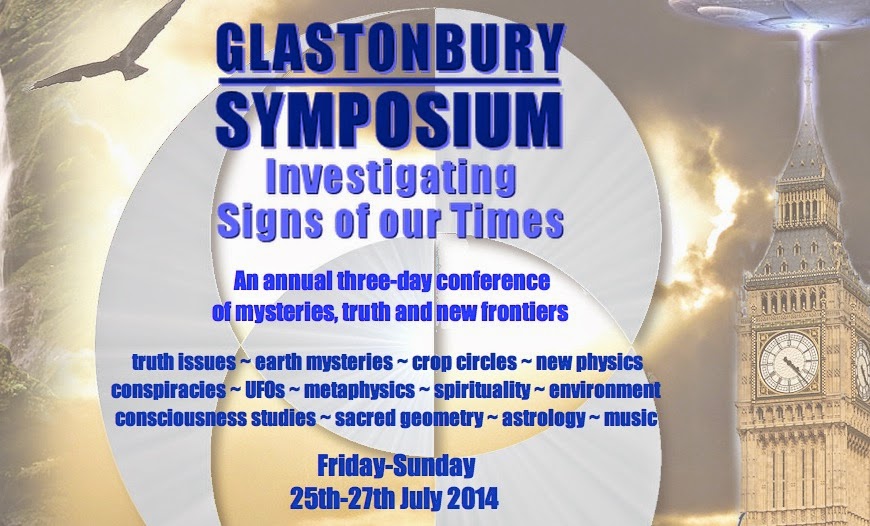 Along for the full ride was my Dad who shares my interest in alternative matters, and we drove to Glasto on Friday morning, 25th July, ahead of my 3.15pm talk slot. The challenge here had been to keep the content engaging, but chop it down from my usual two and a half hours to a succinct one hour. With 200 or so in the clued-up audience I was a little anxious, but I was hugely encouraged by the warm response I got, and the throng of people queuing up to speak to me afterwards. The only glitch was the stiflingly sweaty temperature in the Town Hall as Glastonbury baked in 30-degree heat, which sure highlighted those who’d neglected to use deodorant. My talk was recorded, and I hope to get it posted to Youtube as soon as it’s available. Keep coming back to the site to check. 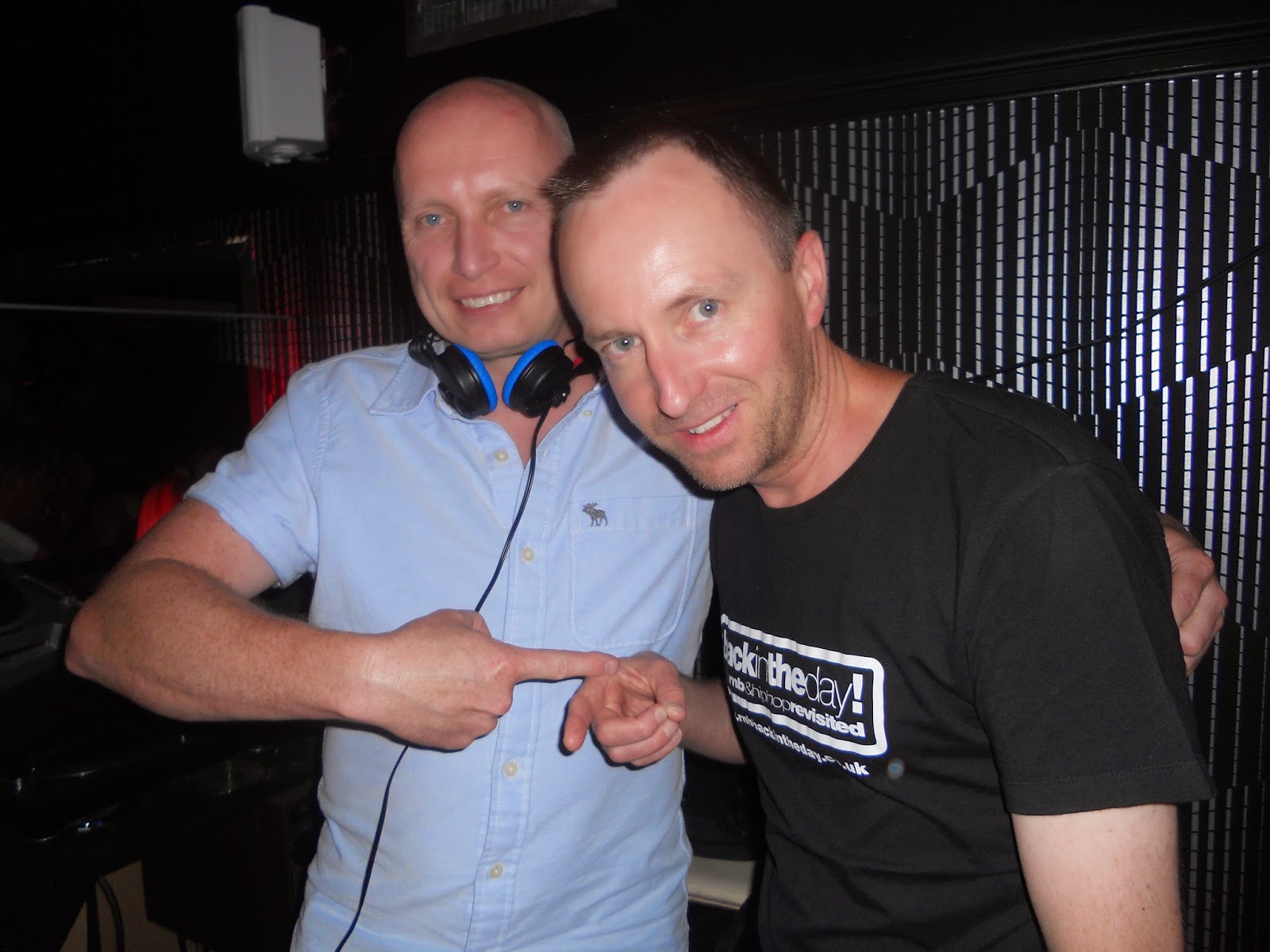 The weekend was broken up only by my DJ gig for Back In The Day in Swindon on the Saturday night. This involved leaving my pops at our guest house in Somerton, then burning rubber up to Swindon to drop the 80s, 90s and early 00s revivals alongside Martin ‘In Full Swing’, then bombing it back at 2am. I never miss a chance to spin at the brilliant BITD events, so the road trip was more than justified.
The Glasto weekend was outstanding, with a vast array of speakers covering some fascinating subjects, our favourites being Andy Thomas, Ken O’Keefe, Mary Rodwell, Simon The Spaniard, Magnus Mulliner and Leo Rutherford, (who I stepped in to save from a mauling by a disgruntled Christian after Leo had spent time highlighting the psychopathic despot that is the God of the Old Testament!)
Another amazing element of the Glasto experience was that, throughout the days, my Dad and myself had mused on certain subjects, and had raised questions. In each case, within a few hours, one or another of the speakers would raise the very same issue that we’d been reflecting on and offer an answer. I also found myself experiencing mini premonitions, where a name, word or phrase would come into my head out of nowhere and the following day I would see the same name or phrase in a news story. It certainly seems like the good vibes have awakened some kind of psychic sensibility in me, and I’m all for that.
That then, was July!