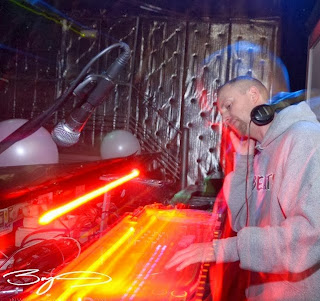 September proved to be the usual mix of radio, DJing, podcasting and writing in both the conventional and ‘alternative’ arenas. This, coupled with the challenges of parenthood and home life, constitutes a mix that I’m now familiar and comfortable with, and ensures that life remains anything but boring!
My first engagement was a re-appearance on Dawn’s Diorama chat show on internet-based Dark City Radio. This aired live via Skype on Sunday 1st. As well as a few reminiscences about my DJ career, this went into the question of The Hidden Hand and its long-standing work in manipulating the music and entertainment industries from within. Being at 9pm on a Sunday, I was particularly knackered after a gruelling week, but hopefully some of what I had to say made sense!  You can listen back on this link:

On the DJing front, the first gig of the month came on Saturday 7th, and involved the latest in many visits to Manchester, to play at Aura Bar & Lounge, (formerly Lounge 31.) I finished my weekly radio show in Oxford at 8pm, then had the rare treat of a couple of hours at home as my set didn’t start until 1.30am. A Manchester excursion rarely disappoints, and I felt the energy and inspiration kicking in as I took over from resident JC and dropped a set that was heavy on the bashment and garage. It was a fulfilling experience that kept me buzzing on the long drive back til I eventually rolled in at around 6.30am. 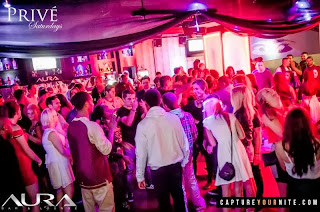 A couple of days later, Monday 9th, I was off to a similar gig, this time the second of my two annual visits to Ibiza to play at San Antonio’s legendary Soul City. It was a late flight out of Luton Airport, (now so militant and monolithic it’s something straight out of Orwell’s ‘1984’!) and like previous Easyjet IBZ flights I’ve been on at this time it was a bit of a flying zoo, with punters downing the booze the minute the plane was airborne and getting rowdy as a result … and that’s just the girls. It was close to 1am when we landed, so I grabbed a taxi straight over to San An, and was in the bustling West End and into Soul City around 45 minutes later. It was another wild and lively session that showed no signs of being so late in the season, and resident DJ Policy was once again on fire and hungry for it, despite having played six nights a week for the entire Summer! 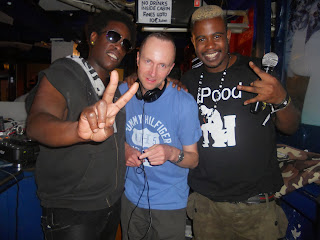 I grabbed around five hours’ sleep – about as much as I ever manage – back at the Playa Bella Apartments on the far side of the bay. After what would be my last swim in the sea this year, 3.30pm had rolled around. Just about Breakfast Time for any Ibiza DJ. Soul City boss Julian took Policy, long-standing resident DJ Horse and myself out for a bite to eat, and the usual entertaining mix of anecdotes and revelations about behind-the-scenes shenanigans at Ibiza’s celebrated niteries did flow. With my return flight not until 1am, I booked myself a day room back at the apartments so I could do the sensible thing and get a bit more shut-eye. Thankfully, the Easyjet flying zoo home was a lot more sedate, with most of the passengers far too knackered to cause any revelry. 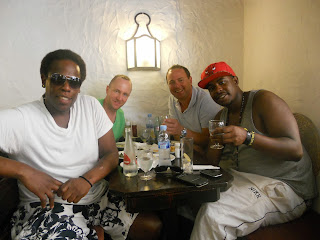 The six weeks of school Summer holidays certainly brought its challenges in terms of productivity!  But with Zaina starting school for the first time this month, (four and a half already!) and Akilah back at nursery, it means I’ve been able to resume my Good Vibrations podcast series after an enforced hiatus. The first new volume has been with Sonia Barrett, a great speaker who gets into all kinds of spiritual matters. This one’s well worth a listen for any open-minded truth seeker, and can be found here:
The follow-up volume was with Fritz Springmeier, who’s a leading authority on the unsettling world of MK Ultra mind control and its routine use within the music business, as well as many other walks of life. His information was grippingly fascinating. Catch it here:
This month’s third volume marks the re-appearance of my good mate Kit Glover, better known in music circles as the producer Long Lastin’. Kit and his lady Sharon, actually met as a direct result of the first podcast interview with him that I put out last October. At the end of this month, they both came to our house for a social, and we took the opportunity to record a follow-up chat in the process. this one’s very far-reaching, staying rooted in the shenanigans of the music game, but going to all kinds of other places as a result. Listen to that one right here: 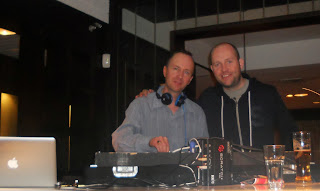 I was on the road again on Saturday 28th. Literally. This was a seven-hour coach slog up to Scotland to play in Glasgow. I am of course aware that flying is an option, but with National Express only charging £21 return from Birmingham, and with cheap trains to Birmingham, what can you do? I got masses of work done on the laptop, anyway, stretching the four-hour battery life to its max, (no power points on board, sadly.) On the agenda was a return visit to Sumthin Sumthin, a soulful, funky excursion, and just the type of night I now play almost exclusively. It’s run by Glasgow DJ Joeboy Higgins at The Living Room restaurant/ bar, and it’s a night I first played in February, which was a lot of fun. You can listen back to what happened at that one right here:
Part 1:
Part 2:
More work, including this diary, got done on the equally long run home on the Sunday.
The only other thing to mention is my weekly radio show The Sound Of Now, which airs Saturdays from 6 to 8pm on OX105 in Oxford. I’m continuing to love the challenge of unearthing two hours of outstanding new music each week from multiple genres, and the latest episode is always available to listen back to on my Soundcloud page at:
http://www.soundcloud.com/mark-devlin
And that, pretty much, was September.

MARK DEVLIN GUESTS ON I AM SOUND PODCAST WITH NAT RICH