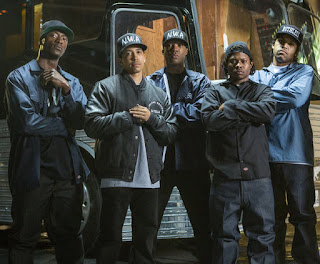 The kids went back to school on Wednesday 2nd September, so after a long Summer, Parveen and myself took advantage of a few hours to ourselves to see ‘Straight Outta Compton.’ While the movie was loaded with late 80s and early 90s nostalgia, its plotline was quite clearly a whitewash. With NWA manager Jerry Heller and the abomination of humanity Suge Knight being portrayed as the villains, Dr. Dre and Eazy E emerged as virtuous heroes, which – particularly in the case of soul-seller and woman-beater Dre – is a little far from the truth. Still, the film provided me with some extra wordage for the chapter titled ‘The Systematic Degeneration Of Hip-Hop’ in my upcoming book, and overall, I very much concurred with Andrew Kay in his review for Black Sheep Magazine:
http://www.blacksheepmag.com/reviews/album-reviews/item/4545-straight-outta-compton-movie 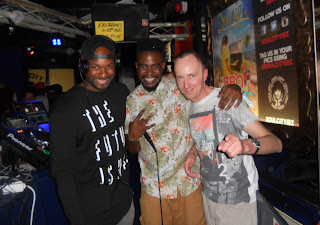 On Sunday 6th, it was time for an end-of-summer return to Ibiza, once again to spin in San Antonio’s Soul City. It was a late flight, landing a little before 1am, but just in time to catch the last bus from the airport. I headed straight to the venue where it was very much DJ overload, grabbing a slot between residents DJ Policy, DJ Uch and guest Spina B. There’s little to say about Soul City that I’ve not said before. I’ll just state that it was lively. 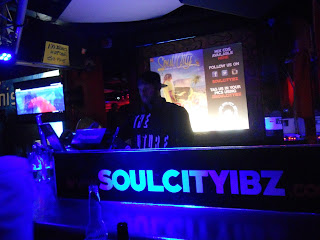 The following day was to have involved me playing my first ever sunset boat party for So Funked, in association with their Monday nighter at Es Paradis. Sadly, some politics of the type I don’t miss one iota since pulling back from the clubs game prevented this from taking place. Incredibly for San An, I managed to locate a great little vegan food spot called Bio Karma just a short distance from my accommodation, and enjoyed a couple of purpose-made meals there, spending the rest of the day doing some book writing on the laptop before flying back at 1am.
We squeezed in another cinema visit the following week, this time to check out ‘Legend’, with Tom Hardy playing both of London’s infamous Kray Twins. A retread seemed a little unnecessary given that 1990’s ‘The Krays’, starring the Kemp brothers out of Spandau Ballet, did such a good job of telling the story. ‘Legend’ managed to come up with some different scenes, and was a interesting treatment, even if Hardy’s portrayal of Ronnie Kray as something of a lobotomised retard made him seem more like the DP Gumby character out of Monty Python. 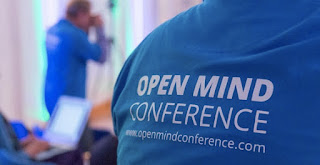 A weekend that I’d long been looking forward to rolled around on Friday 18th as the Open Mind Conference in Denmark loomed. This event, established in 2012 by Frank Rasmussen, has increased in stature each year, and is now very similar to the Free Your Mind conference in the US. I had planned to attend as a delegate, so was very grateful to be invited there as a speaker. I enjoyed the rare treat of flying British Airways from Heathrow, as opposed to the usual shitty Ryanair experience that I normally endure. Getting into Copenhagen late on Friday night, I was taken to the accommodation where myself and fellow speakers Ken O’Keefe and Johan Oldencamp were sharing a room.
The conference kicked off at Kedelhallen in Frederiksburg on Saturday morning with a mindblowing presentation from Johan, discussing The Wholly Science and astro-theology, tying this in with revelations about Saturn, etymology and so much else. My talk, entitled ‘Free Will Consciousness, Consent and The Corporate Music Industry’ followed after lunch. Two hours went by in a flash, and I was very happy with how everything flowed. Judging by the spirited Q&A session and the enthusiastic response it seemed the crowd agreed. Later, Ole Dammegard interviewed Judyth Vary Baker, an amazing 72-year-old who was a former CIA asset and girlfriend of Lee Harvey Oswald. Far from being the man who killed John F Kennedy, she explained how Oswald actually tried to save his life and knew he was going to be framed as a patsy. The evening ended with a hugely inspiring freestyle talk from former Gulf War veteran turned human rights activist Ken O’Keefe. This man is a true hero for humanity and compassion. 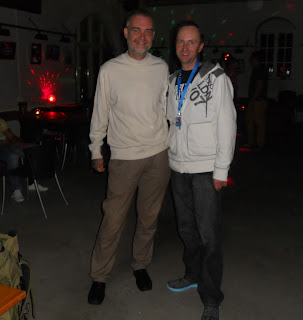 We were back for more on Sunday, where the programme included Ole Dammegard’s talk on false flag terror events, showing how poorly the powers behind the Norway incident of Summer 2011 executed their cover story, making the detail look like a farcical sketch from Benny Hill or Monty Python. You just can’t get the staff these days. Judyth Vary Baker returned to talk about cancer being used as a weapon by the CIA to eliminate undesirables and Lone Vitus presented on food, before we all re-assembled for an Open Panel, taking questions from the audience. Afterwards, about 30 of us headed to a restaurant for a generous meal, drinks and good conversation. 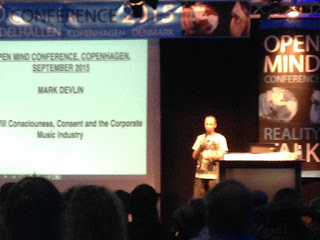 What was so great about Open Mind was that, as its title suggests, it wasn’t afraid to delve into subject areas that would be deemed by many as controversial and ‘dark’, instead encouraging full discussion and reflection. The crowd showed themselves to be alert, well-informed and good-natured, and it was a huge personal inspiration to spend two days in such company. All the videos from OMC are streaming for a limited period on the following address, after which they’re all due to appear on Youtube. I’ll advise further on this site when they’re posted. There are plans to roll out Open Mind as a kind of franchise to different countries within Europe. Big props to Frank and the large crew involved for this one.
A short while after I returned the videos to the equally brilliant Free Your Mind 3 conference in the US from April this year finally appeared on Youtube. You can watch my presentation there on this link:
In the meantime, I’m co-organising and hosting a UK event along similar lines to Open Mind. The Truth & Freedom Alldayer takes place on Saturday 24th October at Bingham Hall in Cirencester on the edge of the Cotswolds. We have seven speakers and two conscious poets lined up, followed by an evening of music from live acts and DJs. Please do help support us with advance ticket sales if you think you can make it, as we’re highly reliant on these to be able to make it all happen. You can get full information on it all from http://www.truthandfreedom.co.uk. And big thanks to simon Stuart for putting together this great promotional video:
Otherwise, The Sound Of Now continues every Saturday from 6 to 8pm. This is my ‘normal’ radio show which keeps me vigilant in sifting out two hours of cool new music. The audio is loaded on to my Soundcloud page each week at http://www.soundcloud.com/mark-devlin
Finally, I broke the brief hiatus that has been necessary for my Good Vibrations podcast series at the end of the month by posting up Volume 71. This consists of a conversation with the author and researcher known as The Black Dot, exploring he metaphysical and spiritual components behind hip-hop, and the reasons why the culture was singled out for exploitation by the corruptive corporations. Really fascinating stuff: