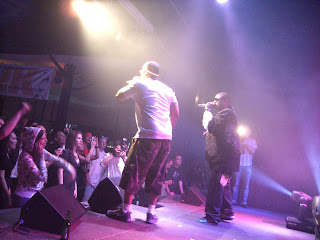 Zagreb has yet to become a destination for dirt-cheap airlines like Ryanair. It’s served by Wizzair, who are certainly cheap enough if you book well in advance. The problem is that they don’t operate the route every day of the week, making quick overnight hops impossible. Old-fashioned flag carrier Croatia Airlines are still criminally expensive – often as much as £300 return. Fortunately I was travelling out on Friday and back on Sunday, two of the days that Wizzair flies.

Zagreb was considerably hotter than the UK, sweltering in near-80-degree sunshine. Friday night’s outing promised to be a proper hip-hop treat. Phat Phillie’s Blackout crew, who’ve hosted Croatia’s leading hip-hop radio show for 16 years, were staging the latest of their regular live shows at Club Aquarius, featuring 90s pioneers Sadat X (of Brand Nubian) and Diamond D (of D.I.T.C) in performance. They didn’t disappoint, tearing through snippets of classics like ‘Punks Jump Up’, ‘Check 1 2,’ ‘Day One’ and ‘All For One’. I got to meet the dudes briefly backstage, before the blunts and liquor appeared in the inevitable post-show shenanigans. It was also good to catch up with old Croatian associates Bronson, Bizzo Bodego, DJ Independent and Phillie. Check out my Youtube page for a couple of bits of footage from a cracking show.

The weekend was not without its flaws, and the first occurred as I left Aquarius. The club is situated out of town on Lake Jarun, and my intention was to walk back to the main road and get a tram. Unfortunately I started walking around the lake the wrong way. By the time I realised my mistake I was deep in wilderness surrounded by chirping crickets and miles from civilisation. By the time I’d eventually made it back to my hotel it was way past 7am. Not part of the plan.

On Saturday night I returned to play at the lively party spot Maraschino Bar in the centre of town. Sadly, more patience-testing was to come. Three times during my set the venue was plunged into darkness from a power cut. Eventually, management decided to move me to an upper level, powered by a different source, but which involved me DJing off a rickety beer table facing a wall, unable to hear a monitor or to see the crowd downstairs. Finally, I was moved back downstairs … where another power cut occurred.

After finishing at 4am, I waited for a tram back to my hotel. And waited … and waited. At least three of every other numbered tram passed before the one I wanted, and I finally arrived back at close to 8am. The only good thing was that I was able to go straight to breakfast before passing out in my room. All in all, the weekend was one which would belong firmly in a volume 2 of ‘Tales From The Flipside’ should I ever get round to writing one!

SPANNERS IN THE WORKS