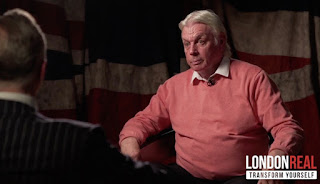 I would like to propose that we make this ‘Reach A Normie’ week, whereby every one of us who knows the mainstream ‘coronavirus’ narrative is a monumental lie and a smokescreen for so much more, makes a pledge to win over at least one regular member of society – a family member, a friend, a colleague – who has never previously thought to question the government or the mainstream news, but who might be compelled to do so given the right push.
We’ll all know people who are so heavily conditioned and mind-controlled that they’d never ‘get it’ if they lived to be 1,000. These people are a waste of resources and energy and must be left to their own karma. There will be others who have the potential for facing up to truth if given the right information, and we’ll all know who these people are.
On that note, the link at the end is where you can watch back David Icke’s era-defining interview with London Real from yesterday.
I can already hear the choruses of “Icke’s a shill,’ ‘don’t trust London Real’, etc. It doesn’t matter what any one individual thinks of Icke, the things he’s said in the past, or this platform. The emphasis here is on what he’s saying about the lies and deceptions that are being spun by the mainstream media about ‘COVID-19’ and, more importantly, what it was devised to lead us into, UNLESS vast numbers of us refuse to consent and comply with what’s planned. His information here is spot-on, nobody could put it better, and his is the best and loudest voice we currently have for freedom, rights and common sense.
This is an ideal video to share with ‘normies’, so long as they’ve not already fallen for the programming that “he’s a conspiracy theorist” or “a nutter.” That Terry Wogan BBC interview was a LONG time ago, and much water has passed under the bridge since then!
Please share far and wide. This has the potential to be viewed by, and to influence, many, many millions of people.
https://londonreal.tv/1000000-fighting-for-freedom/

Right on cue, I just received this e-mail of a reminder of what CAN happen when we work on people, but we’ll never know unless we try:

“I am so pleased my friend knew nothing before lock down , got her to listen to your stuff, now a 180 way of thinking. Think the loss of work etc… and the crazy info from government made is easier to get her to look.”

Proof positive that we CAN all influence people. There’s one who may previously have rolled up her sleeve to take a vaccine who now, hopefully, would think otherwise.

If each person we reached influenced just one other in turn, imagine how quickly we could turn this numbers game to humanity’s advantage.