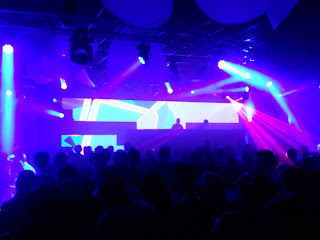 The Southport Weekender took its trademark M.O. of merging the old with the new to even greater levels for this, its 49th outing, and its third at the collossally-sized Butlins venue in Minehead. A host of new rooms and indoor domes ensured even more music flowed in addition to the traditional four arenas, and a bunch of Southport ‘virgin’ DJs appeared for the first time, further enhancing the regular elements of this must-reach event for any serious fan of black dance music.
Jill Scott’s concert with full band in 2012 paved the way for some stunning live sets this time round, (although the massive stage she’d performed on then remained unused this year.) Dwele evoked the atmosphere of London’s Jazz Cafe with his Funkbase performance, Adeva showed she still had her late 80s gusto in The Powerhouse, while 80s diva Melis’a Morgan caused a roadblock in the Connoisseurs Corner, delighting with her inevitable rendition of ‘Fool’s Paradise.’
But the surprise nugget was 70s disco diva Melba Moore, who jarred the Saturday afternoon crowd out of their slumber with a truly empowering set, backed with a great band and a popular pair of backing singers who were left to soak up the applause for their solo renditions as Melba exited stage early. (In some earlier wordplay she’d proposed a ‘Melba toast’ by downing a bottle of what looked like whisky but was surely coloured water.)
Hip-hop got a generous showcase on Saturday night, with Mos Def, (seemingly going by his alternative moniker of Yasiin Bey these days) delivering a set that seemed to divide opinion. On the one hand, he earned kudos for pausing midway through ‘Ms Fat Booty’ to check on a girl who seemed to have fainted or collapsed near the stage. At other times, his performance felt somewhat self-indulgent and worthy, over-running as it did by 30 minutes.
This paved the way for the highly anticipated return of Arrested Development in full live concert, slick and polished throughout, with memorable singaongs for ‘Mr Wendal’ and ‘People Everyday.’ One of the most fascinating things about Southport is getting reassurance that the artists who soundtracked your early days haven’t become cashiers or toilet cleaners, (at least not full-time) and are still hitting stages and giving it all they ever had. Turntablists DJ Cash Money and Shortee Blitz provided beats, rhymes and basslines around the acts ensuring hip-hop heads’ appetites were firmly catered for.
As is generally the case, The Funkbase delivered the most wide-ranging scope of music throughout, from Bigger’s faithful soul steppers, to Goldie’s dawn D&B excursion. Ronnie Herel’s 90s revivals clearly had vintage clubbers going into a nostalgic zone, with gasps of recognition going up with each new tune. Da Firin’ Squad took a gamble by blasting off with a garage set infused with furious microphone energy – and it paid off, igniting the crowd into a jumped-up frenzy, with similar electricity maintained throughout David Rodigan’s 90-minute set. As the token representative of reggae, his selection really hit home, and with lighters blazing and queues round the block, and Rodigan looking like a latter-day Robert Duvall bouncing around furiously in spite of his sixty-plus years, he more than warranted his long-standing nickname of ‘Ramjam’ Rodigan.
DJ EZ repeated the garage fever on Saturday night, by which point the place was rammed to capacity and the atmosphere buzzing. It all provides evidence that the extremely broad remit of this particular arena is truly paying off, and more reggae, D&B and garage players on the bill looks like a sensible move for next time round and beyond.
By contrast, The Powerhouse provided the most consistent sound, as thudding 4/4 house beats thundered from early evening through to 8am, US big dogs like Dennis Ferrer and DJ Spen joining stalwarts such as Kerri Chandler and Steve Butler. The Beat Bar, meanwhile, veered from jazz dance to deep house, breakbeat, Afrobeats and Brazilian jazz.
This being the event’s third year in Minehead, (or Mineport as it’s become known to hardened attendees,) and in spite of the last leg of the journey from Bridgwater feeling as if you’re crossing an entire continent, things are boding very well for the big one in 2014. Next May, Southport hits the big Five O – 50 events since that first outing on a blustery caravan site in Berwick-Upon-Tweed back in 1987. Early booking for this one (like, right now) comes highly recommended, as it’s a guaranteed sell-out.
We’ll sure as hell be there. To make sure you are to, head over to http://www.southportweekender.co.uk pronto!
Here’s to 50 more.

IMPORTANT AND URGENT FOR ALL IN THE UK