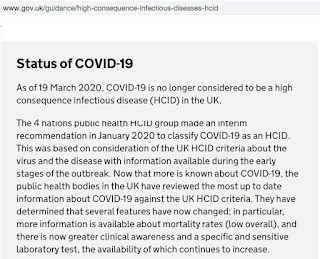 I continue to get a mountain of correspondence from people saying they know the current situation is a monumental scam and they can see through the bullshit, but they feel hopeless and don’t know what they can do to make a positive contribution.
Well, here’s one method, as outlined on the video I put out last weekend. We need an army of people to go on the social media, YouTube channels and chat forums of all mainstream media platforms, and post an avalanche of truthful, alternative information in the comments sections. As these are the only places that many ‘normies’ go thinking they’re getting truthful news coverage, (insert facepalm), this is the only place they’re ever going to have truth come across their radar, as they wouldn’t consciously go looking for it.
Of course, most seeing anything that contradicts official narratives will go straight into defensive denial mode and reject it. But a few may not, and we’ll never know how many might get triggered into applying some critical thought and common sense if given the right nudge.
(A great example of how powerful this process can be comes from observing any of Bill Gates’ official social media sites, or the comments section under any of his videos on YouTube. He is getting absolutely DESTROYED by comments from people calling him out for the satanic, psychopathic eugenicist that he is, and his moderators can’t delete the torrent of comments quick enough. This has to have caused tens of thousands to get wise to his true nature, and now be suspicious of anything that comes with his name attached.)
Everyone will have their own ideas as to which resources will be the most effective in reaching the minds of the masses, but here’s my suggestion for a great starting point. The author of this piece has brought together a wealth of information challenging ‘official’ narratives into a useful one-stop shop here:
https://dogperday.com/coronavirus-pandemic-biggest-lie-in-human-history/
And below are some further suggested resources.
Who will step up to be part of a Truth Army to carpet-bomb these sites with truthful, alternative information?
https://youtu.be/IIDths-UdDA
https://m.youtube.com/watch?v=Ke6gHRnu6gM&t=3s
Off-guardian.org
ukcolumn.org
unpandemonium.org
https://www.richplanet.net/richp_genre.php?ref=282&part=1&gen=99
https://youtu.be/JcpCo4tsoUE
https://cvpandemicinvestigation.com/
https://youtu.be/V66H3BdJMoI
https://m.facebook.com/story.php?story_fbid=1496787600500192&id=100005068988695
https://www.youtube.com/watch?v=IbiUE_2Sv0g
evidencenotfear.com
https://flatearthperspectives.wordpress.com/2020/04/24/the-coronavirus-hoax-testimonies-of-healthcare-workers-hospital-visitors-and-more/
https://ichbinanderermeinung.de/internes-papier-des-bmi/
https://banned.video/
https://swprs.org/a-swiss-doctor-on-covid-19/
https://youtu.be/AHtE52opvkw
https://www.gov.uk/guidance/high-consequence-infectious-diseases-hcid
Unpandemonium.org
https://fromrome.info/2020/04/25/italian-senator-sgarbi-denounces-the-statistical-fraud-on-covid-19
https://www.facebook.com/marcyeiseman/videos/10158024555606638
https://www.youtube.com/watch?v=er3aAIHY0Hs&feature=youtu.be
https://archive.org/search.php?query=%40peekay_truth
https://www.corbettreport.com/
https://www.youtube.com/watch?v=7c0YvEg7rKo&t=6s
PlanneDemicmovie.com
https://www.biometricupdate.com/201909/id2020-and-partners-launch-program-to-provide-digital-id-with-vaccines
https://www.youtube.com/watch?v=o7A_cMpKm6w&t=9s
https://m.youtube.com/watch?v=CFsctgs4OG4
https://www.thebernician.net/grand-jury-finds-prima-facie-evidence-of-pandemic-fraud/?utm_source=ActiveCampaign&utm_medium=email&utm_content=Round+up+of+Latest+Posts+from+The+Bernician&utm_campaign=Latest+Posts+from+The+Bernician
https://beforeitsnews.com/politics/2020/04/over-50000-traumatized-children-rescued-by-military-out-of-tunnels-beneath-us-cities-3184076.html
https://beforeitsnews.com/prophecy/2020/05/sarah-westall-criminal-cabal-war-happening-now-escalating-trafficking-dumbs-clearing-out-ongoing-operations-2511321.html