A section of Mark Devlin’s guest DJ set at Iced Out, Espionage in Aberdeen, Sunday 23rd November ’08. Click on the following link to download: 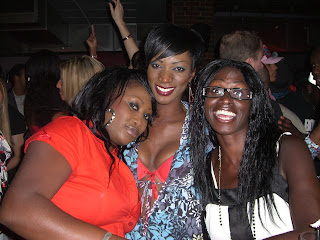 There are certain things that only psychopaths, raving nutters or DJs would do. I hope I fit into only the last of the three categories. Saturday 1st November marked the latest such incident, when I travelled from London to Paris to play a gig, stayed up all night, and came straight back first thing in the morning.

Despite having DJ-ed in almost every other country in Europe, bookings in France had always eluded me. I’ve always put this down to the fact that the nation has its own strong urban music scene, and really doesn’t need any input from foreigners. It’s either that or just a continuation of the long-running resentment that England and France have always had for each other! I scored the booking, at the upmarket Salons Du Louvre, with only 48 hours notice, and at that late stage in the day, all flights to Paris had become prohibitively expensive. The only remotely affordable option was the Eurostar Channel tunnel train – a highly practical one in the circumstances.

I’d only travelled on the Eurostar once before, in ’96 when London departures left from Waterloo. Now they have a new dedicated terminal at King’s Cross St. Pancras, where boarding procedures are very similar to that of an airport. I took the penultimate departure, arriving into Paris’ Gare Du Nord at 11pm. The plan was to save further cost by avoiding a hotel and simply spending all night at the club.

Throughout the e-mailing and texting process I’d been liaising with the promoter in French, cobbling together as many phrases and words as I could remember from my A’ level days of many moons ago. I was quite chuffed when he remarked ‘your French is pretty good’ – although the real acid test is in speaking it, rather than writing. I had plenty of practice of that too.

The club was still empty when I arrived at midnight. It was a slow burn warm-up process, but sure enough, a couple of hours later it was absolutely heaving. Salons is clearly where Paris’ black clubbing population go to party, and the whole spectrum of urban music got an airing as I span my set between the Hard Level DJs Noize and Ou-mar. All in all a great night. Security and management were showing no urgent desire to get everyone out once the night had finished, and it took over an hour to empty, resulting in a few drunken brawls. That would never happen in England. Five minutes after closing, the bar staff and toilet cleaners are the only bodies left in the building. I made my way back to Gare Du Nord ready for my 8am return train, arriving home completely shattered at midday and sinking straight into bed. The things we (I) do in search of the perfect party.

Parveen and myself went to a press screening of ‘Quantum Of Solace’ the following week. Here’s my verdict, as delivered for a review in the Bucks Herald:

Second outings for new James Bonds are always tricky affairs. Timothy Dalton’s ‘Licence To Kill’ and Pierce Brosnan’s ‘Tomorrow Never Dies’ paled next to their superior predecessors. Now, all eyes are on Daniel Craig’s sophomore 007 performance.
CGI sequences notwithstanding, ‘Quantum Of Solace’ succeeds as a solid, gritty and consistently engrossing outing. It’s a lean one, too, clocking it at only 107 minutes as the shortest of all the 22 Bonds.
The plotline picks up where ‘Casino Royale’ ends, with Bond investigating the organisation that caused the death of Vesper, his former lover, and seeking the solace of the title by avenging her. Via diversions in Haiti and Austria, the trail leads to Bolivia, where oily philanthropist Dominic Greene, (Matthieu Almaric) is engineering a political coup, naturally involving vested interests. Bond links with Camille, (Olga Kurylenko,) who has her own personal vendetta.
Happily, 007’s cruel streak has been retained – he finishes off a disarmed enemy as calmly as if he were making tea, and dumps the body of a slaughtered ally in a garbage skip. And there’s further blurring of the lines between heroes and villains. The days of lip-smacking baddies skulking in their lairs and henchmen with amusing physical defects are long gone.
As well as those of acid-penned critics and diehard fans, all eyes at production company Eon are going to be firmly fixed on ‘Quantum’, as executives aim to make this Bond’s most successful box office outing. Based on what they’ve delivered, it’s a status that would be highly deserved.

300, the ultra-successful student night at the spacious Regal in Oxford continued its programme of big-name guests on Friday 7th with The Plump DJs. Although I was aware of who they were, I was largely unfamiliar with their style, which sounded very breaks-driven, and similar to that of The Scratch Perverts a couple of weeks earlier. There’s a piece of footage from their set up on my Youtube page – www.youtube.com/markdevlintv

Sleep was regrettably lacking from the weekend’s agenda. First thing on Saturday, Parveen kindly got up early to take me back to Oxford, from where I caught a coach to Heathrow Airport, ready to fly with Croatia Airlines to Zagreb. With our baby now only five to six weeks away, my days of travelling are soon to be temporarily curtailed. The strategy with November was to fit a few eleventh-hour trips into the diary, before remaining at home until January.

This was my fifth Croatian visit. On this occasion, for the purpose of spinning at Maraschino Bar in the capital city. I’d spun at the same company’s spot in the Adriatic coastal town of Zadar during the Summer.

The day gave an opportunity to link with Phat Phillie, without doubt the all-round hip-hop Kingpin of Croatia. His Blackout show has run weekly on Zagreb Radio 101 for the past fifteen years, he’s involved in production for US artists including Masta Ace and Rasco alongside beatmaster Koolade, and he’s recently started his own Bumsquad Magazine, a franchise of the DJ collective of the same name. We caught up over lunch and a few beers. Vegetarians aren’t enthusiastically catered for in Croatia. A few slices of cheese and a bowl of tomato soup was all I could find.

Armed with a street map, I walked from my hotel to Maraschino. The venue was reassuringly heaving as I got ushered to the downstairs DJ booth for an immediate start. I played for four hours straight, ripping through styles and tempos, and the atmosphere was on fire, providing another reminder of just how satisfying playing to overseas crowds generally is.

There was a price to pay. Croatia has yet to get the public smoking ban – it’s finally due in April next year. The thick stinking haze made my eyes sting, and my clothes and all my possessions, even down to my camera case, reeked sickeningly of stale fag smoke on the journey home. I’d forgotten all about this depressing aspect of the job, which used to be the case every weekend until just 15 months ago.

When I finally hang up my headphones, (which hopefully won’t be for a good few years yet,) another factor that I sure won’t miss is the sleep deprivation. I got barely an hour of shuteye before having to return to the airport for a punishingly early flight home. For the second Sunday running, I spent the afternoon asleep at home, catching some essential Zs.

I got a night off from G’s and a rare opportunity to play the main room at The Second Bridge in Bath on Thursday 13th. Twice a month the venue operates a specialist night called Second Bass, dealing with electronica for one session, followed by R&B and hip hop for the next. Considering it closed at 2, I was getting concerned when the venue was still empty at 11.30. But an hour later there was a highly respectable turnout of enthusiastic urban heads, (as opposed to mainstream randoms,) and the place certainly rocked. Friday night saw an equally rammed and lively session of 300 at the theatre-like Regal in Oxford. 48 hours after the last session, I was back in Bath on Saturday night for my monthly session in The Vaults. Short of anything really profound happening, (which it didn’t,) it gets difficult to think of new things to say about regular recurring gigs. So I’ll leave it at that.

By late November, our advanced training in sleep deprivation seemed to be in full effect. My sleeping ‘patterns’ have been shot to pieces for years anyway. Now, Parveen’s disturbed routines have been added to the picture. With our baby now less than a month away, it’s all useful grounding. With six late nights in a row starting on Wednesday 19th, daytime naps were the only way to cope.

The sequence contained mainly routine outings – the radio show, a Bicester, an Oxford and two Watfords. The standout was my trip to Scotland on Sunday 23rd – the last time I can afford to be more than a couple of hours from home until into the new year.

With Britain’s cold snap making the headlines, I checked the websites avidly, expecting the event, Iced Out at Espionage, to be living up to its name. In the event, although snowbound, Aberdeen was no less chilly than Birmingham. After watching ‘The Empire Strikes Back’ in my hotel room, I linked for bite to eat with my DJ homie David Craig, still the key player in Scotland, (now Glasgow-based,) before moving up Union Street to the multi-levelled Espionage. Dave’s been running Sundays there for an impressive six years. On this occasion the night wasn’t particularly busy, but we still had fun with the music, and there’s a recording of part of my set available for download at http://www.sendspace.com/file/3o44xl. Also hanging out in the DJ booth was off-duty DJ Kojo, a walking electronic database who has a phenomenal knowledge of artists, tracks, producer credits and labels when it comes to 90s urban music. We had the kind of avid anorackish chat that would make my wife yawn with boredom and head for the nearest exit.

Check this out – hot Consequence joint and video, produced by the dude Koolade outta Croatia