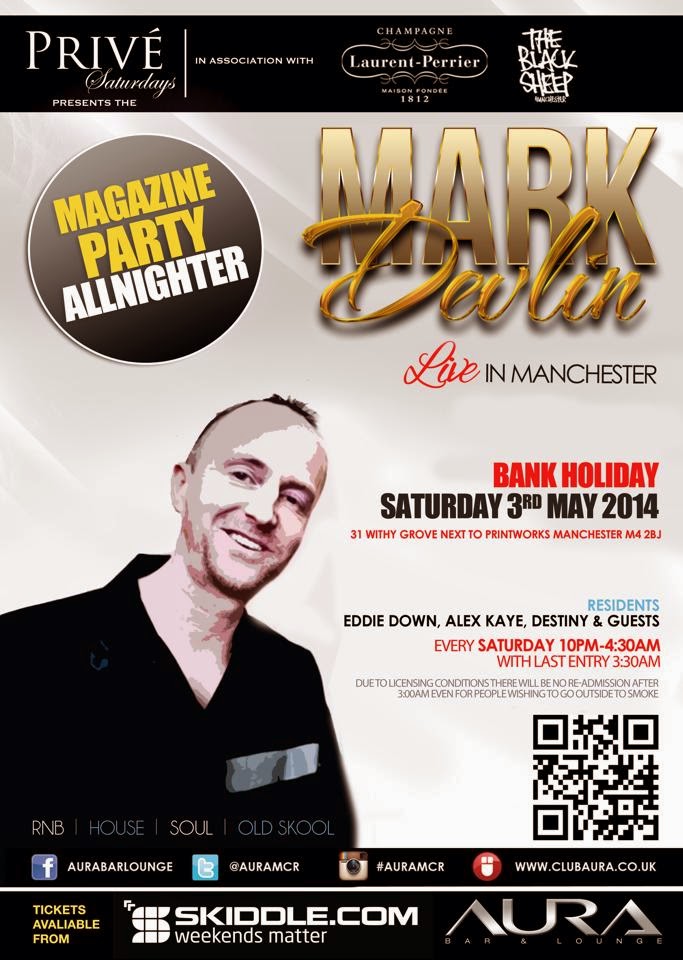 Straight after my radio show on Saturday 3rd, I hit the long road north to Manchester for my latest appearance at the city’s Aura nightclub. The place is run by long-time DJ/ promoter Eddie Down and his Brown Suga collective, and was previously known as Lounge 31. The event was an all-night affair running to 6am, but I’d requested a 1-3am slot as a 160-mile drive, followed by DJing, then a 160-mile drive home again is a pretty tall order for one night!  My set was fun, and a useful experience in keeping a young ‘urban’ crowd entertained by being creative and not having to opt for too many obvious hits.
The Sound Of Now is one of the two weekly radio shows I currently present. This is the ‘normal’ one, running on Oxford’s Destiny 105FM. The timeslot is 6-8pm Saturday, which is pretty much perfect, as it marks the transition from whatever people have been doing Saturday daytime, into whatever they’ll be getting up to on Saturday night. I continue to present new music that I’m personally feeling, but of a ‘grown-up’ variety with none of the homogenised toxic garbage that almost every other radio station now gets into. The selection spans garage, soulful and deep house, melodic D&B, and a fair amount of underground hip-hop and soulful grooves. For various testing reasons, getting a decent recording of each week’s live outing has been a bit of a challenge, but I seem to have now settled on a method of being able to post each week’s show on my Soundcloud page at the following link, from which you can listen back or download:
http://www.soundcloud.com/mark-devlin
Here’s the latest show: 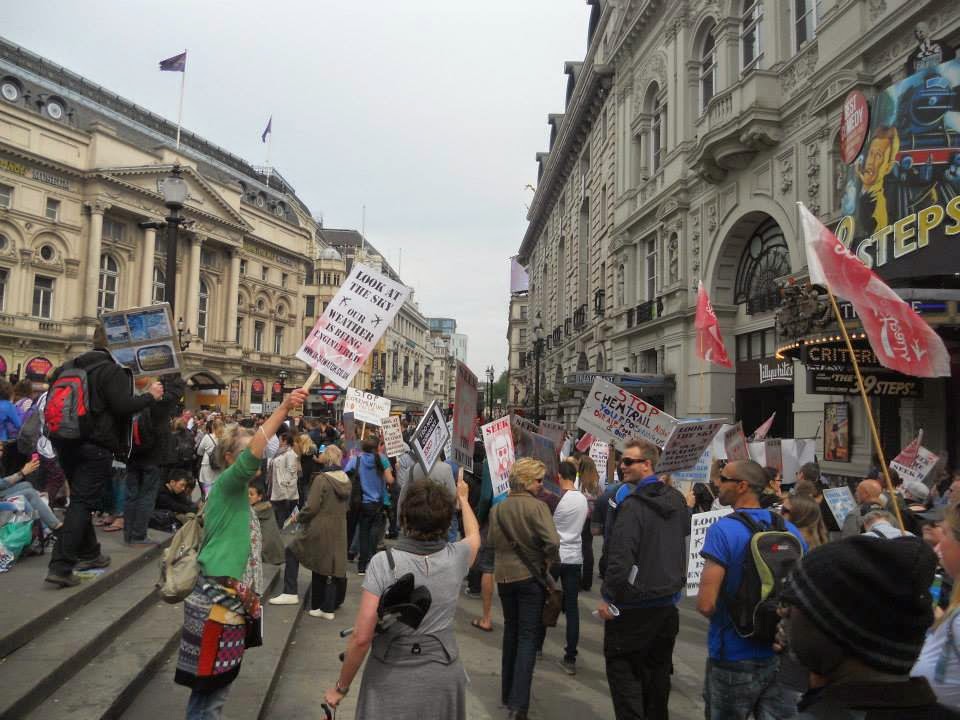 Monday 5th was the first of two ludicrously distributed Bank Holidays in the UK; we get nothing for weeks, then three all at once, then nothing for another three months and I’d love to know how this insanity was decided upon. On the agenda for this one was a protest event in London to raise public awareness of the chemtrailing/ geo-engineering agenda, and to present a petition to the government with thousands of signatures demanding an end to this criminal insanity. Of course, no-one’s naive enough to assume that the government will immediately cease all activity because of a petition, but the point is, this event was making a statement, as hundreds first assembled in Hyde Park, then marched through Central London to Downing Street, carrying banners and handing out flyers to members of the public. It was a great, highly-spirited day and a strong meeting of minds, made even better by warm sunny weather, and in the process, the UK became the second country in the world after Canada to officially oppose Chemtrailing. My hat goes off to Paul, Mona, Olga and everyone else involved in organising things. Great to have Bob Truther on his legendary disco bike blasting out conscious reggae tunes all the way too!  Afterwards, a few of us decamped for a bite to eat in Soho Square, while Danny Shine took to his megaphone to shout out a few home truths to some unsuspecting McDonalds eaters. 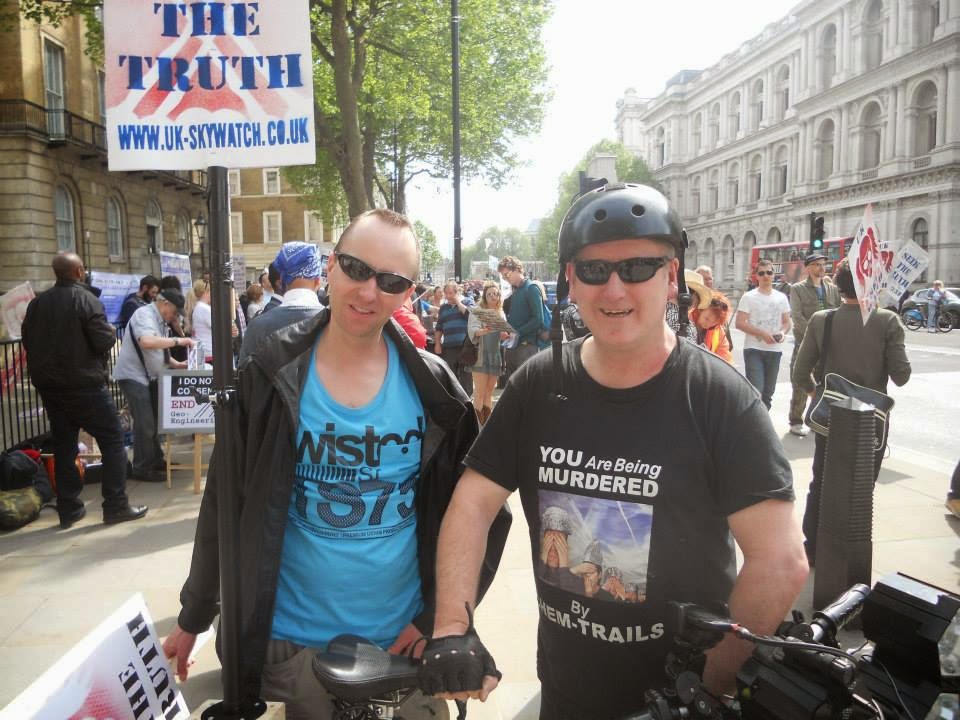 My other weekly radio show is the two-hour conscious music excursion I call The Sound Of Freedom. This one is now exclusive to my Soundcloud channel, and deals with mainly hip hop and reggae, with artists articulating so much of what’s on critical thinkers’ minds in these times. This is the go-to place for music of a type you won’t hear anywhere else, and I’m loving the challenge of unearthing the good stuff from a wide variety of sources every week. I’ve grouped together all shows so far in the following set:
http://soundcloud.com/mark-devlin/sets/the-sound-of-freedom-the-full 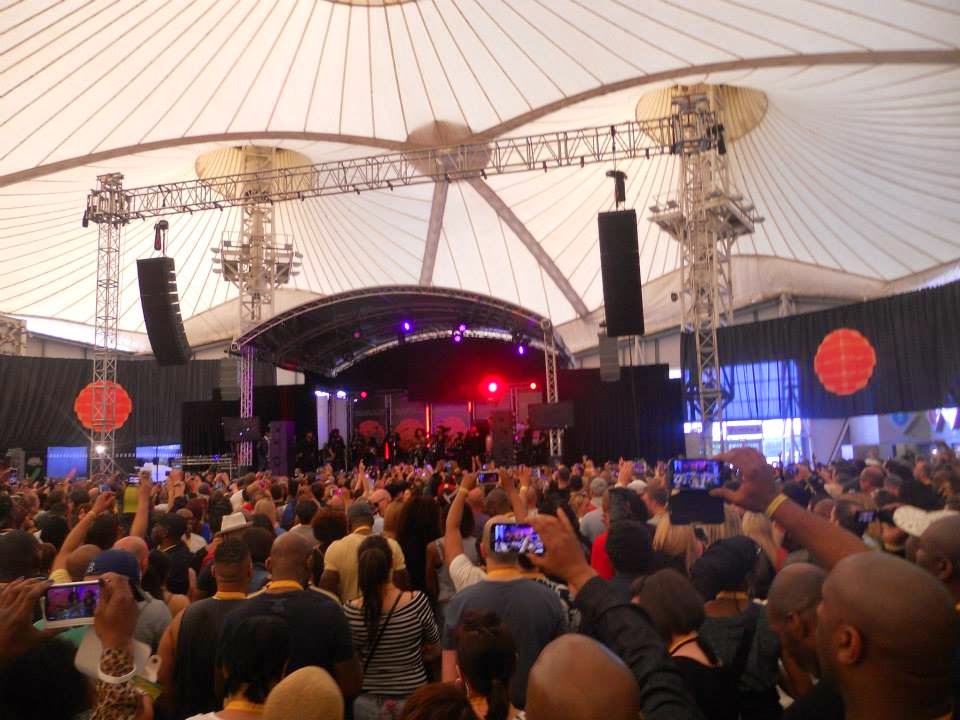 It was annual pilgrimage time on Friday 9th as I headed to the musical Mecca that is the Southport Weekender. Despite its naming after the Merseyside resort which made it famous, for the past few years it’s been based in the sprawling Butlins complex in Minehead, Somerset. I handled the journey in just about three hours, linking up with Gloucester DJs and Back In The Day brand promoters John Mustoe and Martin ‘In Full Swing’ Rafferty, who was eagerly anticipating his inaugural Southport gig, alongside MC JNR. This was Southport’s big 50th event, and the stunning line-up of live acts and DJs from across the black music spectrum certainly didn’t disappoint. Over the course of the weekend I got to see Chaka Khan, Brand New Heavies, Omar, Archie Bell & The Drells, David Rodigan, EZ, Shortee Blitz, Mr. Thing, DJ Swerve, Ronnie Herel, Terry Hunter, Gilles Peterson, Carl Cox and Kenny Dope going back to their soul/ funk/ disco roots, and many, many more. I was there in press capacity for Black Sheep Magazine, and you can see my full review right here.
http://www.blacksheepmag.com/reviews/live-reviews/item/4142-southport-weekender-50
In short, it’s impossible to imagine a better line-up of talent and like-minded music fans all in one place at the same time! 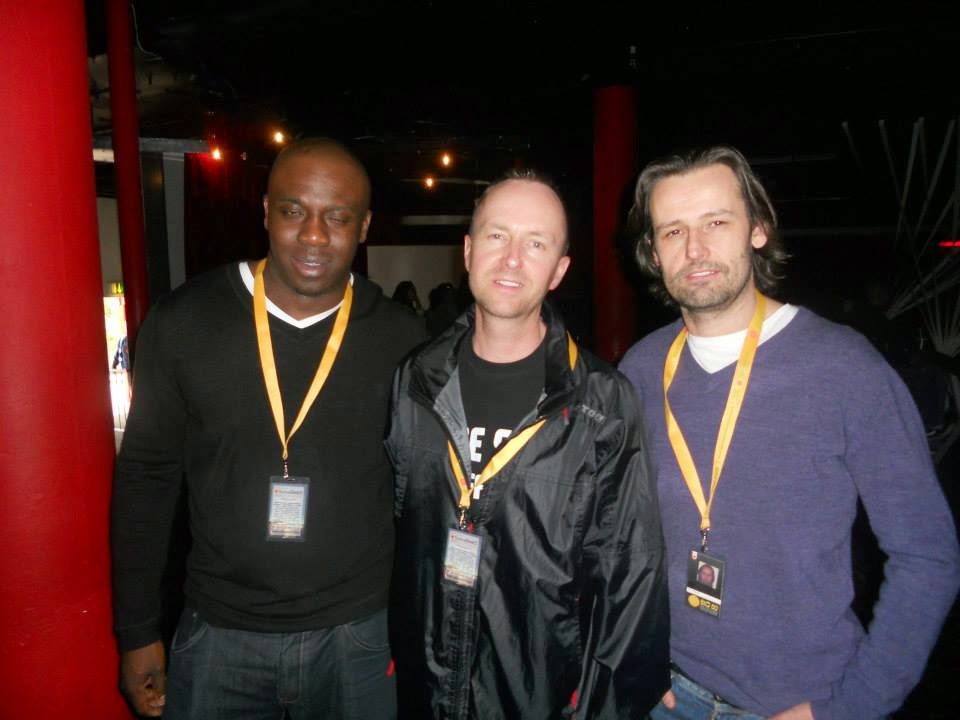 My Good Vibrations podcast series added two new volumes this month. First off was Nexus Magazine UK publisher Marcus Allen talking about the moon landings hoax, always up there as one of the top five ‘conspiracy theories’ (cough, cough.) The other was all about the subject of words and language as magic used to cast ‘spells’, with lifelong student of the quirks of the English language, Laurel Airica. You can catch those two here:
A quick visit to Ireland was on the cards on Tuesday 20th, flying into Knock airport, with the 100-minute bus journey to Galway providing a good opportunity for sightseeing along the way. Every town and village was submerged with posters courting votes for a huge array of different political parties, many of them proclaiming ‘get Ireland out of Europe’. There’s evidently been much public discord since Ireland’s adoption of the Euro and its harsh ‘austerity’ measures following the 2008 (manipulated) banking crash. I certainly noticed how expensive everything now is, even down to the 10 Euro ‘development fee’ that’s forcibly extorted out of all passengers before they can exit Knock Airport. Anyway, it was an enjoyable overnight stop in a town I’d long wanted to visit. 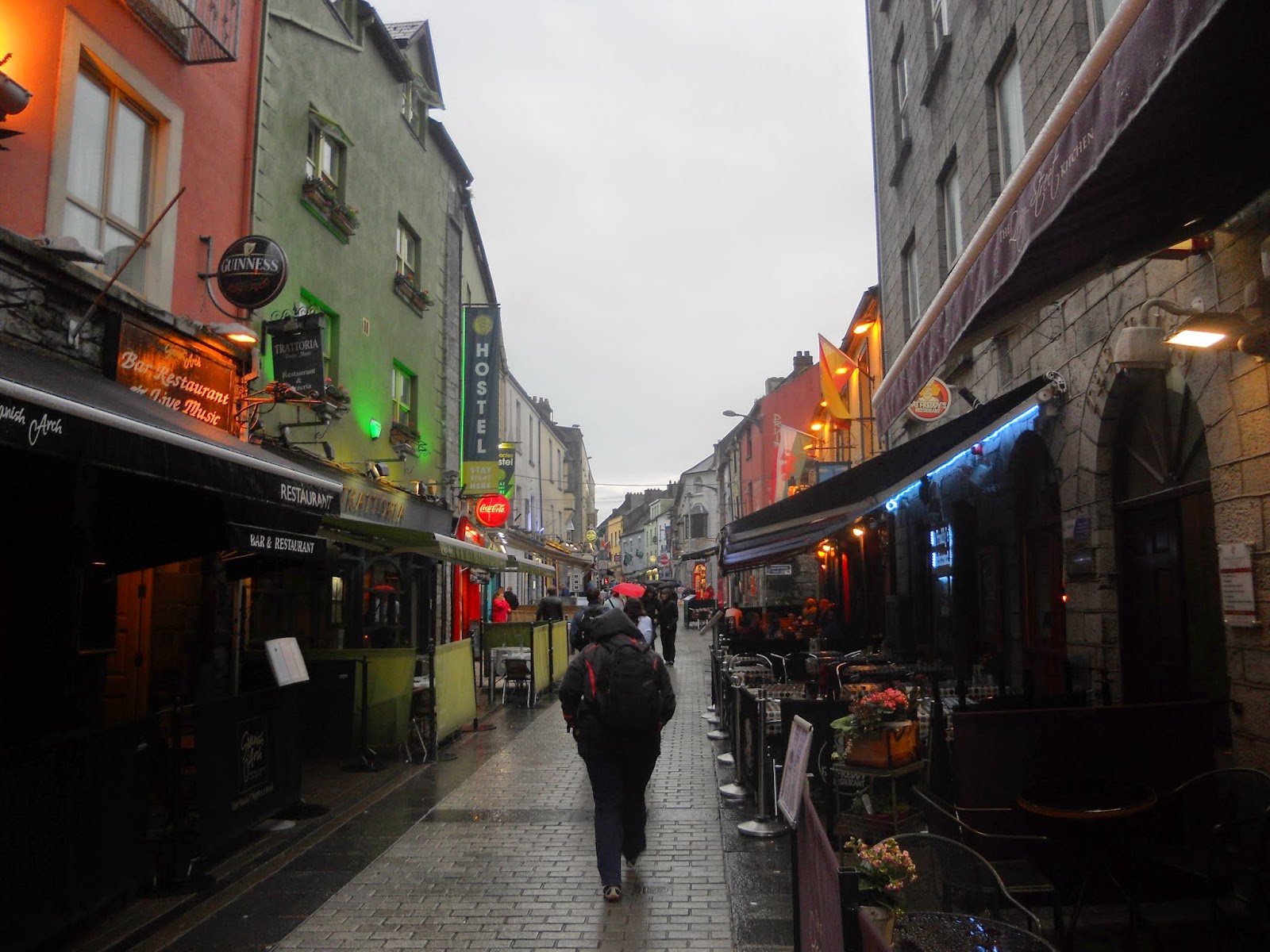 May’s second (grey and wet) Bank Holiday Monday saw me delivering the latest of my public talks on the Mind Control Manipulations of the Mainstream Music Industry. This was for the Leicester branch of Truth Juice at the city’s Music Cafe, and my mate and fellow DJ Ritchie Paul came along for the ride. I’ve added some new content since my last talks, notably an extended section on the many occult elements of the Beatles and the strange ‘Paul is Dead’ theory’, and some mindbending stuff involving numbers.
And that, (apart from the challenges of entertaining a three and five-year-old daily during Half Term week,) was May!
Read More

American poet, lifelong language student and creator of WordMagic Global Laurel Airica joins us to talk about etymology, and the idea that words carry magic power. With everything made up of light and sound energy resonating at different vibrations, we question the power that spoken words can have in manifesting reality. They literally create ‘spells’. The English language is full of words with double meanings, Laurel notes, and this goes far beyond coincidence. Either the original architects of our language structured it this way, or other synchronistic forces beyond human input are at work. She suspects a little of both. 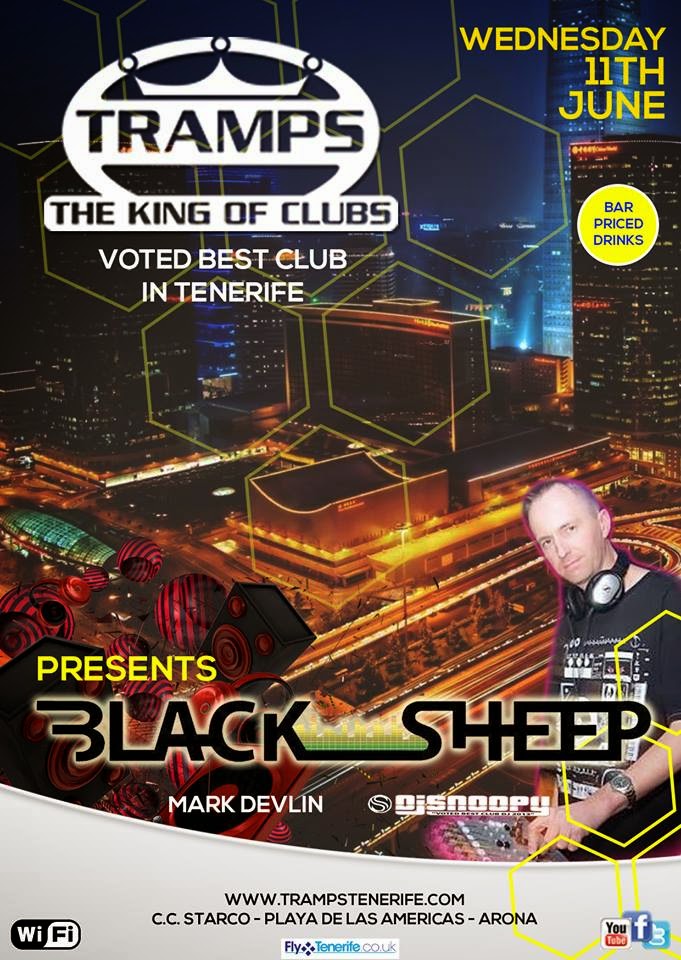 Back to Tenerife next month, bringing the sounds at Notorious/ Tramps alongside the legendary DJ Snoopy.
Read More 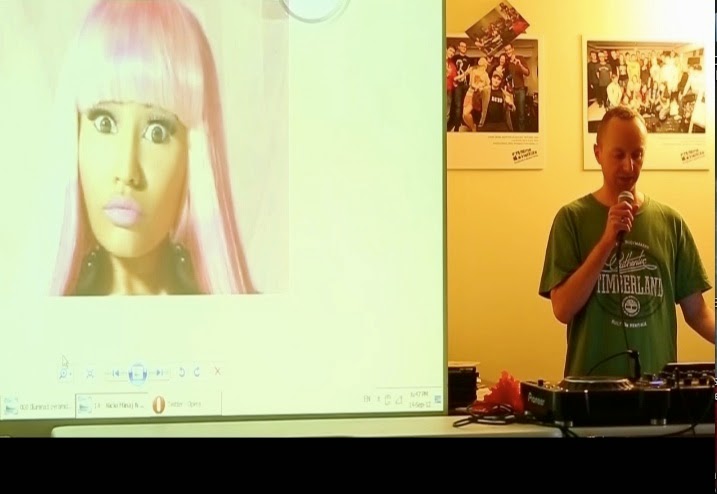