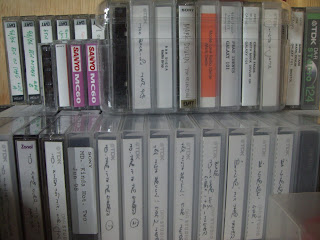 CLASSIC AUDIO – A NEW BATCH OF GEMS FROM THE ARCHIVES!

Yes, people, it’s classic audio time again, with a handful of new cassette and minidisc rips from deep in the vaults. The last batch got such a good reaction, that it’s only right we now make it a regular part of the website.

Here’s what we’ve mined this month:

Another chance to catch the classic New Year’s Eve jam from Apocalypse in Cardiff as the 20th century turned into the 21st. Kid Fury entertains on the mic, while Mark Devlin spins the monster tunes of ‘99, (and occasionally slurs, evidently drunkenly, on the mic.) Check the reference to ‘we made it – the world didn’t end’. Remember all those doomsday prophesies? Kinda an appropriate venue name in the circumstances.
http://www.sendspace.com/file/75ztfm

A recording from the days when I used to stage Birthday club gigs, (really can’t be arsed any more!) This is a highly memorable one from May 2000 at Colours club in Oxford. First off, The Chocolate Boys dig deep in the crates, with Tony ‘Naked’ Nanton spinning UK garage, weekender anthems and new jack swing, while Danny ‘MSD’ Whittaker puts in some wicked mic work. (Classic quote from Tony – ‘this one’s for people who don’t wear tracksuits to social gatherings.’) Then it’s the turn of Stretch Taylor, ending the night with an imaginative selection of revivals. Wonderful times. Now, THIS is the way to celebrate a birthday!
http://www.sendspace.com/file/v7dbpc

I remember cutting short a mini tour of Germany and turning down a gig in Berlin in order to get back for this session of Rubber Soul, an incredible hip hop session that used to run at The Junction in Cambridge. Listening back to this, I have no regrets about my decision. This night was ON FIRE! Three MCs, the mighty Lethal, Kid Fury, and Master G of The Starlight Crew spit with a vengeance on the mic, while Stretch Taylor and myself juggle rhythms, and straight blaze with some reggae dancehall and hip hop killers. This was one of the livest club nights I’ve ever had the good fortune to be involved with, and the amazing atmosphere really comes across on this. This was cleaned up for radio play a while ago – check the reverse-swear-word edit on Akafella’s ‘Put It In My Mouth’ at the end – it’s nothing short of pant-p*ssingly hilarious!
http://www.sendspace.com/file/quvai9

I played regularly in Germany around this time, and this gig happened in Feb 2000 at the big Stadt Palais venue. As I blaze through the joints, an unidentified MC, (forgot the dude’s name – but he’s hot!) handles the mic, before Germany’s DJ Sake steps up on deck duty.
http://www.sendspace.com/file/dobymz

A fondly remembered section of the ‘Joints & Jams’ show that Mark Devlin and Kid Fury used to present on Oxygen 107.9 was the ragga sequence. Here, Fury adopted the persona of his old Jamaican uncle (‘or ‘huncle’ if you say it in a Ja. Accent,) to pass comment on the latest reggae dancehall offerings, while Selektah Devlin spun the riddims. This one’s a classic example of the sort of fooling around that used to go on.
http://www.sendspace.com/file/4spf1j

THE GREAT RE-OPENING, THIS SATURDAY