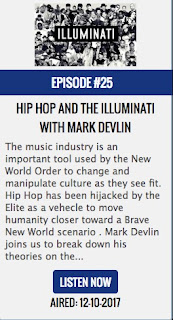 I guested on The Infinite Fringe on Truth Frequency Radio this weekend, alongside Billy Ray Valentine and co-host Josh.

Our talk focused specifically on hip-hop culture, and the systematic debasement of that whole scene, with so many aspects of social engineering now prevalent in its ranks. In many ways, hip-hop can be seen to have been a testing ground for various aspects of culture creation which are now being rolled out throughout society.

We also spend time on the whole situation with Afrika Bambaataa and the sexual abuse allegations against him, which have raised a bunch of uncomfortable questions about the very foundation of the culture that very few seem willing to discuss.

You can stream an edited version of the interview o the link below. The full version will be coming via the Infinite Fringe podcast soon.
http://tfrlive.com/the-infinite-fringe-with-billy-ray-76193/

THE SOUND OF FREEDOM, SHOW 60

TWICE AS NICE IBIZA CROWD SINGS ALONG TO OASIS