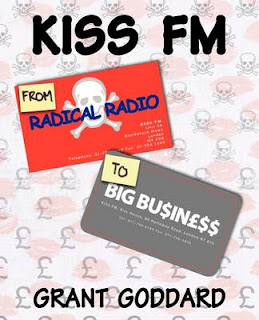 Grant Goddard is either a prodigious note-keeper, or possesses a razor-sharp memory, such is his penchant for intricate detail in this fascinating tome. Goddard was a senior executive at London’s Kiss FM during its transition from pirate to legal status, and the book charts the turbulent behind-the-scenes history of the station as it balanced a well-meaning passion for music with the harsh realities of corporate survival.

On the face of it, the book should be uninspiringly dull, as it proceeds chronologically through a brief history of the 70s and early 80s London pirate scene, into the months and years leading up to 1990, the year Kiss first broadcast legally on Saturday 1st September. Goddard’s candid and precise recollections, however, are never short of captivating, and go far beyond the routine machinations of a business. The book charts the personal crises, ego trips, power struggles and monumental clashes of personality that occur in any workplace, but seem particularly magnified in media-related operations given the types of individual they attract.

Much light is shed on the unpredictable personality of Gordon Mac, Kiss’s leader, and the station culture his style of management brought about, along with the unflinching passion for the Kiss ‘mission’ exhibited by head of music Lindsay Wesker, (who himself has a book out shortly co-written with long-standing Kiss DJ Max LX, titled ‘We Created History: UK Black Radio.)

Goddard does not shy away for a minute from revealing the uglier side of the business, along with the triumphs and achievements, even dwelling on his personal setbacks, such as an attempted Margaret Thatcher-style coup to remove him from the management team, and coming back from a three-week holiday in Gambia to find his flat cleared out by a bitter ex-girlfriend. As with insider accounts of life in Hollywood, or the TV business, the behind-the-scenes shenanigans are a far cry from the glossy exterior presented to the public, and the revelations of in-fighting and disharmony make you wonder how the business could operate at all. Among the DJ anecdotes are the failed attempt to poach Tim Westwood from Capital Radio, and an insight into the nocturnal activities of Paul Anderson and a clue as to how he earned his well-known ‘Trouble’ nickname.

Ultimately, though, it becomes clear that Kiss was very much a labour of love for the pioneers involved before – as becomes unavoidable in all cases – the corporate suits got a sniff of a thriving business opportunity and it became all about spreadsheets, red braces and pie-charts. Definitely an absorbing read for anyone with an interest in the daring days of radio, and UK black music history generally.