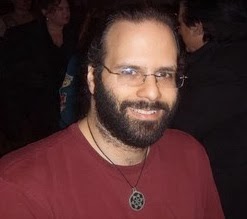 In possibly the most challenging and thought-provoking GV yet, Mark Devlin chats to Mark Passio, a US teacher and lecturer who started out as a practitionier in Anton La Vey’s Church Of Satan. Having acquired much knowledge of the workings of the universe, the appeal of the satanists’ ego-driven worldview waned and Mark decided to go over to the light side and to use his knowledge to awaken humanity from its long-imposed spiritual slavery to a force of evil. He explains how, far from trying to stop him, his former colleagues merely laughed at what they saw as an exercise in futility.
In many ways, he says, they had a point, since the awakening of human consciousness spoken of by so many New Age gurus is a gross exaggeration, as the masses slumber on. Despite this, he maintains, those who have undergone a conscious awakening have a responsibility to share their knowledge with others as far as is practical, and he outlines his ‘tough love’ approach to this.
The results of the ripples spread by this current age will be felt way into the future, he argues, and so it’s still vitally important to do what needs to be done, even in spite of enormous obstacles. Mark outlines the way Natural Law works, and how our free will ties into that, leaving the power to shape the kind of reality we want to experience with us alone.
Read More