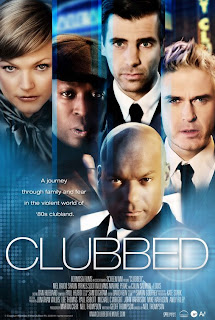 Anyone who goes clubbing will have a bouncer story or two to tell. So what better than a whole movie based around the dodgy lifestyles of four Coventry-based doormen, inspired by the autobiography of real one-time bouncer Geoff Thompson.
That’s the new British flick ‘Clubbed’, and apart from being a cracking good drama, strong appeal comes from the fact that it’s set against the two-tone and soul scene of 1981, with a great soundtrack to match. That and a captivating performance as head doormen Louis by veteran actor Colin Salmon … although we think it’s really 1Xtra’s Ronnie Herel.
Older soul heads will delight at classics from the likes of Chaka Khan, Rose Royce and Gwen McCrae, along with plenty of reggae and ska moments. But whatever your age, ‘Clubbed’ makes for a tantalising glimpse into the darker side of clubland, and its tenuous links to the criminal underworld. It’s due for full cinema release early in the new year. In the meantime, you can watch a trailer on its promotional website – http://www.clubbedthemovie.com/index.html

CLUBBING AT THE FLICKS

Clubland has been depicted in a fair few other British movies in recent years. Here’s a few favourites.

HUMAN TRAFFIC (1999)
The entire movie was based around one debauched weekend of pill-fuelled raving and blunted after-parties in Cardiff, largely based on director/ writer Justin Kerrigan’s own experiences. The general consensus was that it was a fairly accurate snapshot of late 90s UK club life. Cast members included a pre-‘Life On Mars’ John Sim, and an entertaining cameo from Carl Cox as shady club boss Pablo Hassan.

TRAINSPOTTING (1995)
A memorable club-based scene sees the central protagonist Renton, (Ewan McGregor) pick up Kelly Macdonald’s flirty schoolgirl in a warehouse-style club. More entertaining, however, is psycho hardman Begbie’s drunken grope with what turns out to be a very convincing trannie.

RISE OF THE FOOT SOLDIER (2007)
The graphic account of the gangland activities leading up to the infamous so-called ‘Range Rover killings’ of 1995. Ricci Harnett plays real-life former crim Carlton Leach, who spent a spell running the doors in London and Essex clubs in the late 80s. One sequence sees him finally persuaded by his mates to drop E during the emerging Acid House ‘Summer Of Love’. Numerous accounts of this era claim that popping pills calmed many normally psychotic meatheads into friendly, smiling ravers.

YOUNG SOUL REBELS (1991)
If ‘Brokeback Mountain’ was ‘the gay cowboy film’, this largely unsuccessful attempt at capturing the spirit of the London soul scene of 1977 will forever be remembered as ‘the gay soul film.’ The plot centres around Chris and Caz, two pirate radio DJs broadcasting underground soul music against the backdrop of the Queen’s Silver Jubilee, and the capital’s emerging punk scene. Great soundtrack, but the film was marred by a muddled plot and over-emphasis on gay love scenes.

24 HOUR PARTY PEOPLE (2002)
Steve Coogan plays the recently departed Factory Records boss Tony Wilson, who, along with New Order, was behind one of the most seminal of all British clubs, Manchester’s Hacienda, in 1981. Naturally, the movie covers the venue’s opening, the set re-creating its look almost down to the last brick, and inviting back some original-era clubbers for added authenticity.

THE SOUND OF FREEDOM, SHOW 28