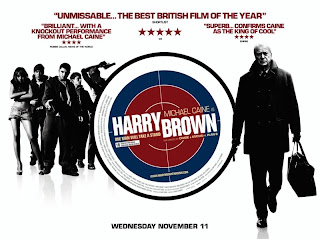 On the surface of it, ‘Harry Brown’ might make movie fans question whether it’s really needed. Grizzled old guy turns vigilante to blow away menacing thugs. Charles Bronson did it in the ‘Death Wish’ series, and Clint Eastwood more recently in ‘Gran Torino.’ But ‘Harry Brown’ is full of surprises.

It starts out as a bleak portrayal of the loneliness of old age, as Michael Caine’s eponymous character shuffles and sighs his way through life on his grim London council estate. Once his only friend is brutally murdered by the thugs and hoodies that blight the area, however, our chess-playing, ale-sipping hero decides enough is enough and, drawing on his past as a marine stationed in Northern Ireland, works his way through the protagonists.

The switch is highly implausible, as Harry goes from barely being able to make it up the stairs to kidnapping and tying up villains overnight. Of course it helps that the police, led by idealistic detective Emily Mortimer and arrogant chief Iain Glen, are portrayed as well meaning but inept, giving Harry free rein to exact his brand of street justice.

Plot anomalies aside, former commercials director Daniel Barber has delivered a dark, raw and brooding drama, tinged with shades of grey and brown to evoke the hopelessness of its setting. The violence is extreme, but the pond-life on display are so despicable, that crowds will be hollering ‘go on Harry!’ at every turn, and ultimately, everyone gets what they deserve. The makers have taken care to incorporate a nice little plot twist at the end, too. Michael Caine puts in a dignified and, on the whole, sympathetic performance, and Ben Drew, otherwise known as the rapper Plan B, makes a particularly loathesome hoodie.