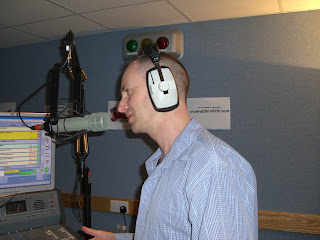 Mark Devlin’s ‘Just Buggin’ show is to start a new tenure on Recharged Radio as of this weekend. The show will now broadcast on Sundays between 8-10pm, beginning 15th August, with Listen Again download links available throughout the following week.

‘Just Buggin’ ran every week for over three and a half years on FM107.9 in Oxford, where it built up a solid fanbase of hip-hop heads hungry to hear the heavy, underground sounds of real hip-hop, old and new, that’s so tragically lacking from virtually every other legal station in the UK. Sadly, last week, FM1079 took the decision to axe all of its specialist shows, including The Freerange Drum ‘N’ Bass show, The Phat Club, Republica Wireless and Unscene Radio. The station has evidently decided to restructure its sound in a bid to pursue a different breed of advertiser. It’s obviously a huge disappointment to the followers and supporters of all these cutting-edge shows, which had always stood out from the bland, generic programming offered by most other stations.

On a brighter note, ‘Just Buggin’ is now getting a new lease of life on internet-based Recharged Radio, a station which champions cutting-edge, challenging new music of all genres. The revamped show will continue to cater for dedicated hip-hop heads by fusing classic boom-bap-style throwbacks with brand new sounds from the original masters. The show will retain its popular features the Street Beat Of The Week, the Old To The New, and a weekly guest DJ mix.

Listen live from anywhere, 8-10pm UK time at http://www.rechargedradio.com, or check out http://www.markdevlin.co.uk weekly for the Listen Again links.

TALES FROM THE FLIPSIDE – RENEGADE STASH

THE SOUND OF FREEDOM, SHOW 39