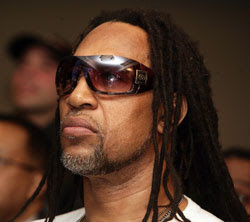 Kool Herc, the Jamaican DJ generally regarded as having been the founder of hip-hop culture, has reportedly been hospitalised with an undisclosed illness. His condition is apparently worsening, and he does not have medical insurance. As a result, an appeal is underway to the hip-hop community to help cover his hospital costs.

The news was first broken by DJ Premier on his popular Live From Headqcourtez XM Radio show. On it, Premo stated:

“Kool Herc is very sick. For those that know about Hip-Hop, who we call the father of Hip-Hop, Kool Herc, is not doing well. It’s funny how we have a father of a culture that still lives, where as in some cultures they are dead and gone even though they may still be worshipped or reflected on in some kind of way.”

“Since he’s very sick and has no insurance, he uses a Metro card to get around, he needs to pay his bills so he can get out of the hospital, it’s ill… If you don’t know about it, now you know about it. …We spoke today, and he needs some help to pay his bills for the hospital because he can’t hold it down. And being that he is the man who set this whole culture off, ya’ll should be wanting to do it any type of way that you can. People know how to reach us.”