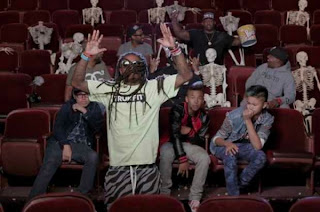 The video for Lil Wayne’s ‘My Homies Still’ has come under scrutiny from multiple commentators, bloggers and analysts for allegedly containing ‘predictive programming’ imagery concerning the fatal shooting of 12 people at a cinema in Aurora, Colorado last week.
Predictive programming, commentators say, is a technique frequently used in Hollywood movies, where yet-to-happen terror events are symbolically depicted in advance. There are a host of these depicting the destruction of the Twin Towers released long before 11th September 2001, for instance.
The intention, say observers, is to subliminally condition viewers to what is set to happen, so that the official version of events is more readily accepted in their minds. There are also more esoteric reasons, they add, whereby an intended event can be manifested more easily if it is symbolically depicted in advance. This, it is explained, implies that the makers of these movies and videos, (though not necessarily the artists and performers) have advance knowledge of what is to occur.
The Wayne video, which you can watch below, besides containing multiple symbols that refer to MK ultra and Monarch programming, forms of mind control long acknowledged to be routinely carried out by the CIA, contains a scene towards the end where Wayne is seen dancing with 12 skeletons in a movie theatre – the same number of victims of the Aurora attack. The shootings are being blamed on 24-year-old student John Holmes, who many have speculated is himself a subject of mind control.

MARK DEVLIN RETURNS TO THE FREE YOUR MIND CONFERENCE, 2016