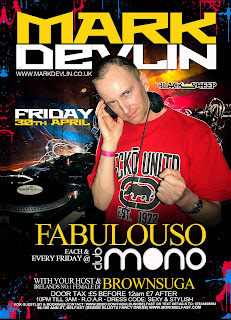 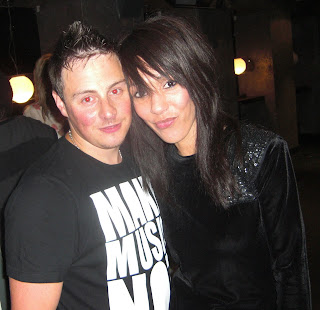 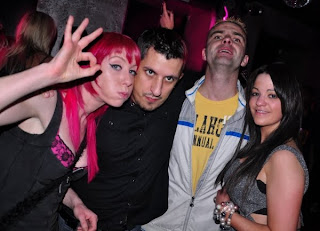 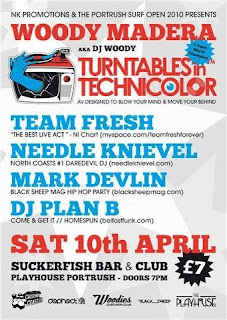 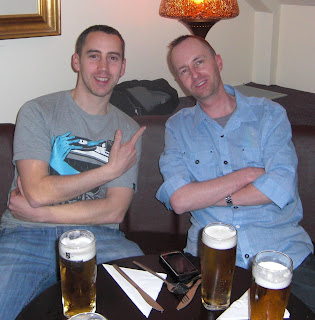 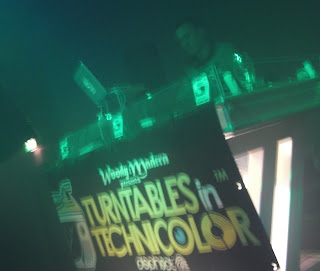 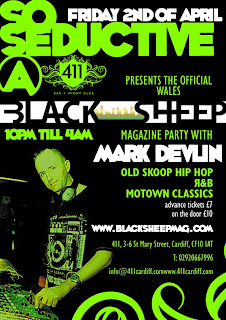 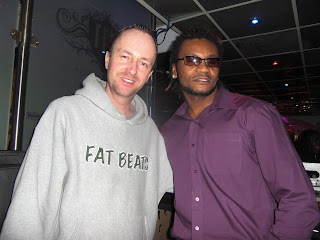 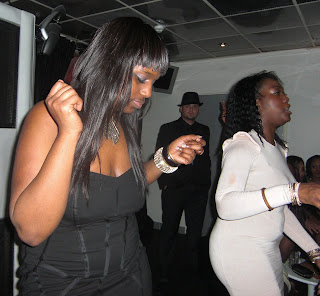 Although I used to make the voyage two, sometimes three times a week – every week – for over two years, it had been a long while since I’d thrown myself into the 240-mile round trip to Cardiff. On Good Friday, 2nd April, I managed to coax Parveen out of clubbing retirement to join me for my gig at The 411 Club, marking the Wales launch party for Black Sheep mag. The M4 was virtually deserted, and we arrived in the city having made excellent time.

As soon as I walked over the threshold of 411, I realised it had formerly been Libertys, which was a legendary soul spot in the 90s, and was the very first club I played in Cardiff in 1997 alongside local hero Tyler and DJ/ manager Marcus. After that, it became Cardiff’s Po Na Na. It’s now operated by veteran DJ/ promoter Mo Moniz and a business partner, who have turned it into a classy, bling spot, with a meaningful music policy. I’d last seen Mo at Soul City in Ibiza, where he was working for the whole Summer season. This year, he told me, the responsibilities of the club are going to limit that possibility.

The vibe, crowd and decor were all excellent as I launched into a three-hour set consisting of what’s best described as every shade and style of black music, without a crap kiddie pop hit in sight. It was a great night in the style of how things used to be in the late 90s/ early 00s heyday of Cardiff nightlife, and one I’ll definitely look forward to getting back to. There’s an assortment of pics from the night here Danced-out, Parveen rested while I took on the battering journey home, and we eventually arrived home at 6am.

With a night off on Easter Sunday, I headed into Oxford to hang out at a couple of events. First off was Blend at Kukui, where DJs Spex, Ritchie Paul and Archie Bizzle put in a nice selection of new and old school R&B. On the door, promoter Tony ‘Naked’ Nanton was bemoaning the fact that all his posters for the night had been ripped down by a rival promoter, which served as a useful reminder as to exactly why I no longer have any desire to promote events myself. Afterwards, I headed to The Regal for a 90s House night, featuring grizzled veterans Graeme Park, Jon Pleased Wimmin, Brandon Block and Boy George. George was playing as I arrived, (there’s a video clip of his set here The night was full of bald/ grey middle-aged ravers, which actually made me feel quite youthful.

Easter Monday 7-10pm saw me slip into musical utopia on the radio as I dropped a new instalment of Urban Anthems on FM1079. Tearing through revivals, the show featured everything from quiet storm-style slow jams and bugged out hip hop, through to jungle, D&B and an extended sequence of soulful US house. Honestly, you’d have to be pretty damn fussy not to find something in the selection to your liking. The complete playlist is right here, and you can listen back to the whole show via these links:

Having visited Scotland and Wales with the Black Sheep Mag brand, the next destination for a launch party was Northern Ireland on Saturday 10th. The event was on the back of the after-party for the Open surf festival in the North Coast town of Portrush. The day before, promoter/ DJ Needle Knievel advised that, sadly, the festival had to be cancelled owing to some glorious weather causing the ordinarily choppy sea to be as still as glass. The party, however, was still going ahead.

Headlining was DJ Woody Madera from Burnley, Lancs, a skilled turntablist who’s recently taken to incorporating visuals into his show by manipulating Quicktime movies via his Serato laptop set-up. We linked up for a meal at The Playhouse and traded stories from the field before the evening got underway. On stage with Woody were Portrush’s own Team Fresh, kinda half DJ crew, half live band. My set was in the venue’s Suckerfish Bar, where I was happy to be able to drop a far-reaching, digging-deep set without any undue interference. Afterwards, I headed into the bakehouse of a main room to catch Woody’s set, which was certainly impressive. There’s a brief Youtube clip of what went on here:

Needle Knievel’s mum runs a B&B, which had us sorted for accommodation. Our civilised afternoon flight times allowed Woody and myself to enjoy a good breakfast before the drive back to Belfast City airport amidst more glorious sunshine.

Prior to 14th April 2010, no-one would ever have believed that a volcanic eruption in Iceland could cause unprecedented chaos to international air travel, grounding flights and costing airlines as much as £10 million a day. As we all know, however, it happened, and one of the thousands of casualties was my British Airways flight to New York, scheduled for Saturday 17th. I’d been due to do a radio mix spot with The Untouchable DJ Drastic on a college station in Brooklyn, along with a couple of hip-hop interviews. By the previous night, it became obvious that I wasn’t going anywhere, and I re-booked my flights to travel in September. I consoled myself with the thought that things could have been worse, my sympathies going out to the many thousands of unfortunate travellers stranded at great cost in either the UK or elsewhere.

The amount of casualties the hip-hop world has suffered over the past 15 years or so defies belief. It’s a mortality rate that’s unequalled in any other genre – even the wild world of rock. Since starting my Just Buggin’ radio show, it’s felt like I’ve been presenting a tribute every other month, and it’s generally some of the most creative and influential figures on the scene that are involved. On Wednesday 21st, I found myself devoting my entire show to the the wildly differing musical legacies of Guru, and Malcolm McLaren.

Guru’s track record speaks for itself, and the glowing tributes that dominated the internet are testament to what a uniquely special and talented guy he was. I met him in 1999 in Fat Beats Records in Amsterdam. He was in there shopping for vinyl. Celebrities respond differently to public approaches, and hard-edged New York rappers often don’t take kindly to it. But Guru was the perfect gentleman, only too happy to chat. Downstairs from the shop was a basement studio where the Fat Beats guys used to broadcast a weekly radio show, and Guru agreed to record an interview right there and then. He was in town to promote Gang Starr’s Full Clip: A Decade Of Gang Starr. I’d been fortunate enough to secure an early copy of the Full Clip 12″, and remember playing it at a Queens Day party only for all the other DJs to rush up and ask, ‘WHERE did you get THAT?!’, such was Gang Starr’s heat at that time.

I also had a lot of respect for McLaren. Fashion-conscious and subversive from his days managing the Sex Pistols, he could always be counted on to be an agent provocateur, so it was little surprise when he became captivated by New York hip-hop culture in the early 80s, resulting in his ‘Duck Rock’ album. Deeply eccentric, he was never anything short of fascinating.

The show featured the Throwback At Noon Hot 97 mix by DJ Mister Cee which was broadcast the day after Guru’s death, followed by DJ Premier’s tribute mix to McLaren. You can Listen back via the links below.

UK hip hop producer Stealf was my live guest on the following week’s show. As well as UK rappers like Dap-C, his beats have been graced by the likes of Game, Jim Jones and Lil Wayne. Listen back links to the show are here. The same evening I also chatted to original veteran Masta Ace on the phone about his many years in the game, his recent collaborative album with Edo G, and how he considers himself to have developed and matured since first emerging as a hungry young spitter. Links to that audio right here:

After the show, I headed down to The Cellar, where Kid Fury was hosting a special Guru tribute edition of his regular Wordplay night. It was an open-mic freestyle session over nothing but classic Gang Starr beats. The results were strong. There’s a couple of brief Youtube vids of what went down right here:

Finally, the month ended, with a return to Northern Ireland, flying from Birmingham to avoid the gridlocked bank holiday London airport routes. Fabulouso at Mono in Belfast, hosted by DJs Brown Suga and Ghost, is always a good one, and Friday 30th was as bouncing as ever. On the way to the club, Brown Suga pointed out a couple of historic buildings close to the riverside that were noticeably starting to lean, Pisa-like, due to subsidence of the ground. One was a prominent clock tower. It wasn’t looking good.

With my usual good fortune, my room at the Ramada Encore was next door to the noisiest bastards in the building. It was clear that a 4am initial attempt to politely ask them to keep it down was going to be fruitless when one of the cocks involved answered the door in his girlfriend’s nightdress. Oh dear. So the hotel duty manager was brought in to do his thing.

… and that was April.