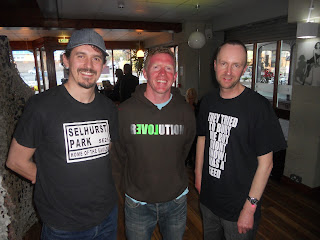 A UK Bank Holiday weekend kicked off the start of May, only a month after the previous one, and the Sunday involved me heading to Ipswich. The day was hosting the town’s annual May Day Festival in Alexandra Park featuring an array of music acts, and followed by an after-party in a nearby bar called L’Apres. Event organiser Andy Mackay had booked the brilliant Plumb Jam to headline the main stage, and I set off on the long road journey in anticipation of catching their hard-hitting brand of awake, conscious music.
Regrettably, fate had other ideas. As someone who’s suspicious of any kind of tracking and surveillance methods I choose not to use sat-nav. It’s not that old-school map-reading skills let me down – more that I didn’t have a map at all that caused me to get hopelessly lost on an unwanted magical mystery tour of Ipswich. Interestingly, though, although this made me late for Plumb Jam’s set in the park, it did save me an absolute drenching as, just as the band launched into their first song, the heavens opened in a deluge of biblical proportions, clearing the park in a few seconds flat. It was a great shame for the group, whose equipment was also disabled by the floods. Fortunately frontman Keith Twidale took it all in good spirits as everyone sauntered off to L’Apres.
The evening had an eclectic music policy, and I’d been booked to drop a set of conscious hip-hop, reggae, soul and dance of the type heard on my Sound Of Freedom podcast. It was great to get the chance to drop all this stuff in a live environment for only the second time, and I stayed mindful of keeping the pace dancefloor-orientated, as well as dropping some science with the lyrics. My two hours was over in a flash, and I ended the evening chatting to DJ Karl Cross who’d dropped by ahead of a gig of his own, before getting into some very deep conversational rabbit holes with Keith and Andy. In all, a day extremely well spent. 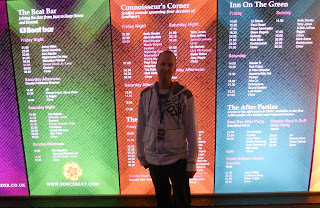 The following weekend was road trip time again, as the occasion of the very last Southport Weekender arrived – the 52nd event after 28 years of putting on parties. It’s not always easy setting aside the time to attend Southport, but I’m always glad I did. Joining me for this one was my mate Andrew Kay, who came in by train from London. After scooping him up in the car, we headed straight to Gloucester to collect John Mustoe, one of the DJs and promoters behind the Back In The Day club brand, before continuing on to Minehead, Southport’s home of the past few years, (‘the Minehead Weekender’ somehow doesn’t have quite the same ring to it.)
The giant Butlins complex was buzzing with anticipation as we arrived to collect our press passes on Friday evening, and we bumped into DJs Ronnie Herel and Bigger, two pieces of the Southport furniture, as we grabbed a bite to eat. Most of our time was spent in the Funkbase, the home of club-orientated R&B, street soul, hip-hop, reggae, garage and other good stuff, but some hopping around the other three rooms – The Powerhouse, The Connoisseurs Corner and The Beat Bar – as well as the newly-installed Suncebeat Dome, was necessary to gain the full flavour of the event. One thing that was striking about this last line-up was the lack of household-name headline acts. What live action there was came from Shaun Escoffrey, Jarrod Lawson, Lalah Hathaway, Reel People, Tortured Soul, house vocalists Michael Watford and Peven Everett, Kenya and The Rebirth, (makers of ‘Evil Vibrations’ which inspired part of De La Soul’s ‘A Rollerskating Jam Named Saturdays’, and the opening jingle to my current radio show!) 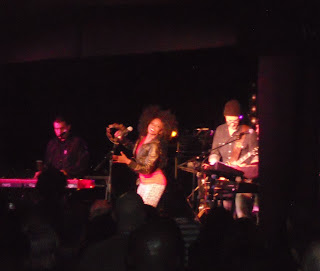 Over the course of Friday and Saturday we absorbed a variety of DJ sets, with real standouts for me coming from John Morales, Sean McCabe, JP, DJ Diggz, Wayne McDonald, Tony Humphries and Louie Vega. Saturday afternoon’s Funkbase was totally rocked by Shortee Blitz and some storming garage from EZ, while Saturday night once again belonged to David Rodigan’s spellbinding reggae set, alive with energy and augmented by some wild theatrics from a born entertainer. Pretty impassive for a 64-year-old. Check the video for the flavour of that one:
EZ at Southport:
Rodigan at Southport:
The comprehensive overview of the whole event, written by Andrew for the Black Sheep Mag site, is right here:
http://www.blacksheepmag.com/reviews/live-reviews/item/4470-southport-weekender-52
In all, this weekender did lack some of the celebratory vibe that I expected to be in the air, and attendance was clearly down on recent years. I was happy to have been a part of history, though, and although I suspect we may not have seen the last of the Southport vibe, as an annual outing it will certainly be missed. 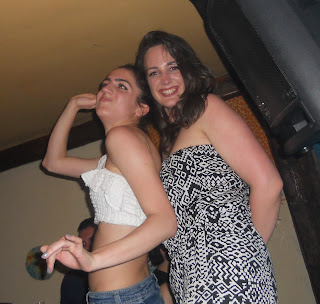 A couple of days later was my birthday, and I’d lined up a bit of a weekend adventure in The Balkans to mark the occasion. The former Yugoslavian nation of Montenegro is very much off the general tourist map and remains largely uncharted territory for foreign DJs, but as such, it’s just the sort of place to appeal to me. Ryanair recently started cheap flights to and from Stansted, which sorted me for my return home on the Sunday. Unfortunately though, they only fly two days a week, leaving me with an old-fashioned and very expensive routing out with Air Serbia via Belgrade as the only option on Friday 15th. It was a long day of travel, with some breathtaking views of the mountain landscape as we came in to land in the capital, Podgorica. I was collected straight away by DJ Maraku, and after navigating the puzzling directions to my accommodation, we scooped up a couple of his mates and headed straight to the town of Niksic in the country’s north, for that night’s gig. It would have been ideal to have done this on the Saturday to save such a frantic schedule, but it turned out to be a hugely enjoyable night at the bar venue called Tunjel. I played for two and a half hours to a totally amped crowd who responded wildly to my hip-hop, soul, funk and reggae revivals. It kept me buzzing all the way back to Podgorica, and it’s an experience I’ll certainly be looking to repeat sooner rather than later. Some wild pictures from the night are here:
https://www.facebook.com/djmarkdevlin/media_set?set=a.10155527141685371.1073741887.682780370&type=3 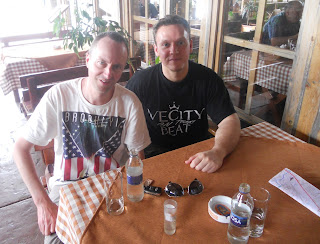 Saturday involved taking a train through more stunning sunny landscapes to the Montenegro coast, where I hooked up for the afternoon with conscious rapper DISL Automatic in his hometown of Bar. We enjoyed a great vegan meal, and the accompanying conversation was as deep and heavy as it was always destined to be. I’ve featured various of Disl’s tracks on my Sound Of Freedom podcast, and interviewed him a couple of times. If you don’t yet know about this brother and the type of stuff he gets into in his lyrics, you’re missing out, trust me!  You can get a flavour of what he’s all about from the following: 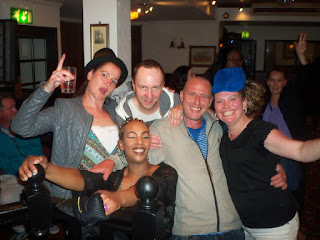 By the time Saturday 23rd had come around I’d not done my Sound Of Now show live on Destiny 105 for three weeks, so I was itching to get back on the airwaves and rinse out two hours of top-quality tunes. Although the show got off to a good start, disaster struck a short while in as an electrical power cut took the station off-air for 45 minutes. The following night, I was back at The Blackbird Pub in Blackbird Leys, Oxford, to guest at another Community Jam hosted by Destiny reggae dons Lloyd and Elvis of Sir Sambo Sound. I dropped another set of soulful, funky revivals to a good-natured crowd which was every bit as fun as the previous session on Easter Sunday. There’s a great set of pics from the night here:
https://www.facebook.com/djmarkdevlin/media_set?set=a.10155560619850371.1073741888.682780370&type=3
The last Saturday of the month involved a marathon four-hour radio shift, as I preceded my show by covering for Danny Prince on his So It Goes Vinyl show. I had great fun spinning a wide-ranging selection and tried to say very true to the ethos and style of Danny’s show. Here’s the result:
Part 1:
Part 2:
Earlier in the month Parveen and myself had had a social visit from my music producer mate Kit, aka Long Lastin, and his lady Sharon. We took the opportunity to record this month’s only instalment of my Good Vibrations podcast, this one focusing on his new album, ‘Illumi Nation’, and the many conspiratorial/ spiritual/ truth subjects it addresses. You can hear the resulting podcast here, which also includes a handful of the album’s tracks, and details of where to get hold of it:
The Sound Of Freedom conscious music podcast continues as ever, meanwhile, with the full set of shows so far available from this link, (and via Mixcloud, Podomatic and iTunes RSS feed.)
http://soundcloud.com/mark-devlin/sets/the-sound-of-freedom-the-full
The last few days of the month weren’t the happiest, with each member of our household ill in some way, and coinciding with school half term. I went down myself with a heavy sinus infection, which made me feel like shite. It all served as a reminder of how you really are nothing without your health, and the absolute importance of taking care of your body, because it sure has a way of letting you know when you’re not!