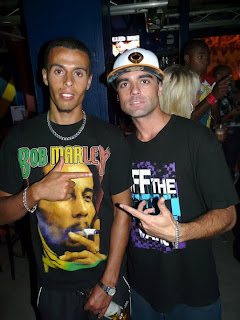 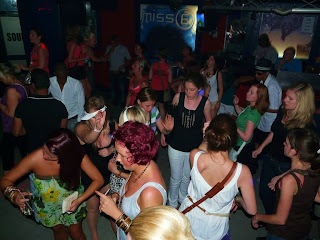 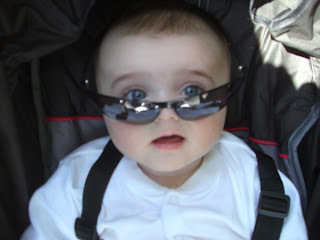 It was live studio guest time for ‘Just Buggin’ on Wednesday 3rd June, as UK super-producer Davinche passed through for a chat. He’s notched up quite a few notable productions over the years, including Kano’s ‘Ps & Qs’ and ‘Brown Eyes’, and is just preparing to drop his new solo album ‘Open Minded.’ There’s a snippet of footage from the show on my Youtube page.

Saturday 6th June was notable for marking the 65th anniversary of D-Day, as well as my Grandad’s 109th birthday, (or at least it would have been had he not long since departed this mortal coil.) It also marked mine and Parveen’s fifth wedding anniversary, and to mark the occasion we headed off for a weekend in Switzerland.

Initially, I was due to spin at a party in Zurich, and I booked our flights there accordingly. A short while after came the tiresome news that the gig had been cancelled. Fortunately, my good DJ buddy Soulchild stepped in to save the day, hooking up a gig for us across in his hometown of Basel. This involved getting the train across from Zurich, a bit of a hassle, but a small price to pay in the circumstances.

The weather forecast made for grim reading. As with London, heavy rain was on the cards for Basel – although, as things turned out, this did little to keep the crowds away from the club. We checked into the brand new Ibis Bahnhof which had only opened nine days earlier, and where everything still smelt of fresh paint, fabric and carpets. We then hit the classily-decorated Singerhaus, setting for the night’s gig, loosely billed as a ‘Ladies night’ special.

As we walked in, I was alarmed to be reminded that Switzerland has yet to get the public smoking ban. This makes it one of the last remaining European nations not to have made the switch, quite a surprise considering its attention to efficiency and cleanliness in almost all other areas. The venue was engulfed in a thick, stinking haze, not helped by the fact there was no air-con, and it served as a rancid reminder of how every night out in the UK used to be as little as two years ago. The gig itself was excellent, and the crowd well up for a party.

As was Parveen. Since the arrival of Zaina her clubbing opportunities have been highly limited, and she took full advantage of the opportunity. We grabbed a 6am kebab with Soulchild, arriving back at our hotel as the Sunday church bells were chiming.

Sunday was largely a wasteman day as a result. We just managed a quick hook-up with Soulchild and his girl Fabienne, (aka R&B singer Faye B) before our return to Gatwick, and then on to pick up Zaina from her Aunt and Uncle.

The following weekend was notable or marking the first week in 56 that I didn’t work on a Saturday night. Instead, we headed off on a family holiday to Cornwall, renting a cottage on the Lizard. The pattern is always the same. I’m restless for the first couple of days, itching to get on the laptop every five minutes. But a couple more days and I slip nicely into leisure mode and don’t want to come back. Far too much Cornish ale, clotted cream and pasties got consumed, but I feel a couple of country lane runs compensated. On Friday 19th, we dined at Rick Stein’s overpriced but admittedly impressive St. Petroc’s Bistro in Padstow at the request of the missus. The following night I played my monthly spot at The Second Bridge in Bath, conveniently situated halfway home, with an M4 Travelodge to break up the journey.

Right now, it’s all about Black Sheep Magazine. The hottest urban/ black music magazine on the net has finally gone live, after several months of preparation and planning. The project’s being run by former Blues & Soul writer Joanna Chaundy and myself, alongside our sh*t-hot Webmaster Lee Marquis, and a team of writers and photographers who used to be associated with B&S. With Touch, Hip Hop Connection and B&S all now gone, we saw an opportunity to switch up the on-line music magazine game in a major way. The site is interactive and multi-platformed, with audio interviews, video embeds, all manner of features, and a nice line in really bad sheep puns. Check it out and see what you think:

Summer workers go to Ibiza for eight weeks, holidaymakers go for eight days. My annual trip to DJ at San Antonio’s Soul City generally involves me being on the island for just eight hours, and this was the case again on Wednesday 24th. This lunacy is purely down to the absurdly inconvenient flight times from London to Ibiza, all of which leave either at the crack of dawn, or last thing at night. I opted for the latter, the Easyjet out of Stansted, (thankfully less of a flying zoo than the one out of Luton the previous year.) The flight ended up being delayed by 80 minutes, diminishing my time on the White Isle still further. Truly a straight in, do the job, straight out affair.

For many years, Soul City has stood as Ibiza’s only venue offering across-the-board urban music every night of the Summer. This year they had some competition in the form of Twice As Nice’s new bar venue, further back in San An’s West End, which has adopted the same music policy. After Soul City owner Julian had driven me into town, I took a quick peek at TAN’s venue. Myself, the DJ and a solitary bar girl were the only people in the room. By all accounts the season has got off to a slow start for most Ibiza venues, (not that they’ll admit it publicly, of course,) no doubt brought about by the economic situation of the past few year eating into holiday budgets, and not helped by the fact that Ibiza is so damned expensive.

Back at Soul City, I took to the decks alongside new Summer resident Tommy Sparks and played from 3 to 5am, flitting through bassline, UK funky, bashment, Dirty South rollers and all points in between. The spot remained busy with a largely British crowd all the way til 6, and it ended up being the fun and fulfilling experience it always is. After a mere 90 minutes sleep and a snatched bread roll from the breakfast room I stumbled into a taxi back to the airport, heading home ready to play Izi in Witney on Thursday night.

Everyone will remember where they were when they first heard the tragic news of Michael Jackson’s death. I was an hour into my Izi set when news of his heart attack started swarming all over Facebook. Before long, punters were coming up to the booth, mobiles in hand, asking ‘is it true about Michael Jackson?’ Once we’d been able to establish the news wasn’t a hoax, I announced it on the mic, and proceeded to play four MJ classics, which fortunately always travel with me. Disappointingly, a handful of punters expressed their disapproval, impatiently snorting ‘how many more Michael Jackson records are you going to play?’ No respect. You can hear Lady Ga Ga any time for f*ck’s sake. This was a meaningful moment. Overnight, New York City’s DJ Drastic produced an MJ tribute mix, which we’ve made available as an exclusive download via Black Sheep. Just go the homepage at www.blacksheepmag.com to download.

My second trip of the week to Stansted Airport came on Friday 26th, which saw me heading out to Belfast, spinning for Fabulouso at Mono. The night’s run by a rare husband and wife DJ combination – Ghost, formerly of the Gigolos crew who relocated to Northern Ireland five years ago, and his missus Simone, aka Brown Suga. The night was a real blast, and the crowd highly receptive to the MJ tributes. The club’s air con struggled to cope with the humid conditions, with the dancefloor resembling a lake when the hordes parted at the end.

Back on Saturday for end-of-month business at The Bridge in Oxford. I ended the session with the full six-minute version of ‘Thriller’, including the Vincent Price laugh, playing out with the lights up to ‘Human Nature.’ It’s only right.

… and that was June.