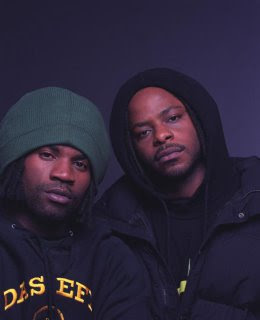 The ten that are blowing up the radio airwaves and/ or rocking dancefloors this month.

DAS EFX: CAN U FEEL IT (White)
The return of one of the hottest and most distinctive two-man crews of the 90s is an event in itself. The fact that this bases itself on the Fat Boys 80s classic of the same name only adds to its authentic good-time feel.

Q-TIP: GETTING’ UP (Universal Motown)
In a perfect world all hip hop jams would have the sublime bounce and flow of this latest offering from the Tribe refugee, proving he’s lost none of his touch for lacing a wicked rhyme. The world’s far from perfect, of course, which is why we don’t. So in the meantime, this is one to be absorbed with full hip-hop relish.

NATALIA Featuring KALIBA MOTES: PERFECT DAY (Upper 11)
This type of bright and breezy street soul bouncer, arriving just too late to be a perfect Summer jam, doesn’t seem to get made much any more at the expense of tunes with tricky beat patterns and dumb filtered vocals. This one keeps it all simple, and is highly appealing as a result.

JOLEON D’AVENUE: CAFE CLOUD 9 (Unique Mood)
Although a bit of a mouthful, JD’s is a name worth remembering. Dubbed ‘the British Barry White’, this East London muso fuses hip hop, soul, jazz and funk to uplifting and inspiring effect throughout his ‘Mellow Defiance’ album, this being the standout uptempo cut. Real music for people who feel music!

BRYN CHRISTOPHER: SMILIN’ (Mafia & Fluxy Remix) (Polydor)
Bryn’s looking like a dude that’s about to enjoy some mainstream success, and his sound, like that of Natty and Roachford before him, isn’t strictly ‘urban’. Nevertheless, this tune belongs on these pages thanks to the lively, skanking reggae-style workout provided by scene veterans Mafia & Fluxy, melding with Bryn’s abrasive vocals to highly striking effect.

GTA: THE WAY (GTA)
Forget London, Bristol and Birmingham. It makes me proud that my city of birth is shining so bright for heavy music in the form of GTA frontman Chima Anya and sidekick Ineffible. Empowering lyrics delivered over a driving beat with wailing backing vocals from Jada Pearl. This one’s got the whole package. OX represents!

BUSY SIGNAL: TIC TOC (VPD)
Has anyone else noticed that genuine club-rocking reggae dancehall joints are about as rare as mother-in-law jokes these days? Here’s one that ticks (no pun intended) all the right boxes, however, riding on a riddim that would have sounded at home during the genre’s glory days of the late 90s. This one’s club-ready.

PEOPLE UNDER THE STAIRS: THE WIZ (Om Records)
While lyrical themes in mainstream hip hop still seem restricted to the same tired old cliches – flossing, b*tches, packing heat, gold rims, instructions on how to perform retarded little line dances, etc – the underground scene is still showing itself capable of being more imaginative, this one standing as a cool, chilled-out ode to the attractions of being in Australia. It’s all set to a mellow head-nodding groove that could make you swear for a minute that you’re relaxing with a cocktail on Bondi.

MR LIVE: AT THE CROSSROADS (White)
Underground enthusiasts might recall this Fort Greene, Brooklyn resident as one half of the duo Mr. Live and Tony Bones, (‘Placebo’, ‘Splashing Over Monica.’) His remains one of the most distinctive voices in the game, and it resonates to full effect here over a sick, twisted beat that J Dilla would have been proud of.

ESTELLE Featuring SEAN PAUL: COME OVER (Homeschool)
Refusing to be easily pigeon-holed, Estelle slips dextrously into mid-tempo reggae territory on this bright and soulful excursion that – because it’s her – should get felt in all the right places.