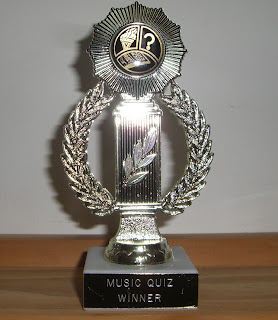 Back in the day I used to be a bit of a wizzkid at music quizzes. Presenter Stuart Cameron and myself were frequently drafted on to the Fox FM radio team in the early 90s as secret weapons, and our presence usually secured us first place. I have a couple of winners’ trophies taking pride of place in my living room as souvenirs.

After several years’ absence, I decided it would be fun to start getting involved again, and on Monday 2nd, recruited myself into the FM107.9 team. The snow had done little to keep the trainspotters away from the pub in Cowley, Oxford, and we were one of ten teams. My 70s and 80s pop game is strong, but only got tested on a couple of occasions. Thankfully, programming boss Sophie Bruce was on hand to answer all the noughties stuff, (I lost interest in the mainstream charts in about 1990,) with veteran presenter/ musical oracle Joe O’ Neill answering just about everything else. We came fourth – room for improvement without complete disgrace, I feel. (Rather worryingly I cleaned up by being the only one to identify the lyrics to Elton John’s ‘Nikita’!) I enjoyed having my knowledge tested anyway, and look forward to more of the same.

The rest of the month consisted of gigs I play on the regular, and, although I rack my brains, there really is only so much you can say about such routine outings. I arrived at Que Pasa in Watford on Saturday 14th to find the place packed with football fans, and the streets crawling with police on horseback and riot vans. Watford had just lost at home to Chelsea, so a lot of drowning of sorrows was going on. Thankfully no riots. I had a couple of live guests on my radio show mid-month – Chima Anya of Oxford’s GTA and Bristol’s Triggadon both putting in return performances. As ever, entertaining freestyle sessions ensued, with some footage clips now posted at www.youtube.com/markdevlintv

The Biggie biopic ‘Notorious’ was released nationally on Friday 13th. But there was no sign of a showing in Oxford or Aylesbury; evidently these places aren’t considered ‘hood’ enough to handle a hip-hop movie. So Parveen and myself headed to Milton Keynes Odeon to catch it. I wrote a review for The Bucks Herald in exchange for our pair of press tickets, which turned out as follows:

The biggest challenge facing director George L Tillman Jr’s biopic of the late great rapper Biggie Smalls was always going to be to make it palatable to non hip-hop diehards. Not an impossible feat; ‘Ray’, for instance, told the Ray Charles story to a wide and varied audience. Although the elements of hip-hop culture on display may be alienating to non-followers – the dialogue isn’t something you’d want to recite over tea with the vicar – ‘Notorious’ has enough cinematic devices to satisfy the demands of most movie-goers – a rags-to-riches tale, romance, sex, drama, violence, and, at the centre of it all, a deadly rivalry, in this case between Biggie and fellow slain rapper Tupac Shakur.
Although lacking any facial similarity, newcomer Jamal Woolard’s imposing frame gives the central character plausibility, and strong support comes from Naturi Naughton as Big’s protégée and occasional lover, Lil Kim. Derek Luke’s performance as super-producer Sean ‘Puffy’ Combs, however, seems way off-track, not least because he bears no visible similarity to the real-life subject. Antonique Smith plays the other woman in Big’s life, his widow, the singer Faith Evans, with Angela Bassett the only familiar performer, playing the rapper’s mother.
While hip-hop fans will relish seeing the story of Biggie’s short time at the top acted out, the screenplay glosses over certain more controversial issues, crucially, the real reason the rapper died in a hail of bullets in March 1997 and who could have been behind it. Similarly, Woolard’s portrayal only really scratches the surface of what really made Christopher Wallace/ Biggie tick, and such sanitisation may well be down to the fact that the movie was sanctioned by Wallace’’s mother Voletta, and Sean ‘Puffy’ Combs as producer and executive producer respectively.
What certainly aids the film is its fast moving pace and its hugely moving ending. ‘Notorious’ emerges as an exciting and tragic account of a man who was, to many, the best that ever did it.

Outings for the remainder of the month included a packed Monday night at The Bridge in Oxford, (where would clubland be without the reckless spending habits of our beloved students?!), a first-time showing in the military town of Aldershot at Yates’, and a venue in Peterborough which wins the award for having the rudest and most socially incompetent management I’ve encountered in all my years of DJing. In the interests of diplomacy, I’ll avoid naming the establishment. Hint to the general manager – you can get a deodorant stick for as little as 39p in Tesco. You should try it.

I also dropped in on my DJ mate Stretch Taylor in Watford. Stretch and his wife Maria had a baby girl, Arianna, who has an eight-week head start over our Zaina. We spent half an hour exchanging a few tips on sleep maximisation techniques … much needed.

One place I never imagined I’d ever DJ in is my childhood hometown of Witney. On Thursday 26th, I took up a new residency at the trendy bar/ club venue Izi, and pretty good it was. I was rather unkind about Witney in the opening chapter of ‘Tales From The Flipside’. In the couple of years that have passed since, I’ve come to realise there are far worse places to play!

MD AT CLUB 8, PORTSMOUTH, THIS SATURDAY