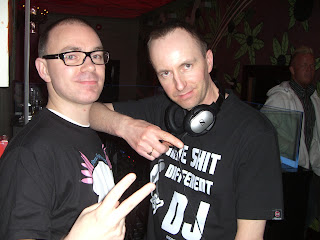 I’m not naïve enough to assume the rest of ’09 is going to continue on such a positive vibe … but is there a better way to start a new year than bringing your newborn daughter home for the first time!? I picked up Parveen and little Zaina from hospital on New Year’s Day, and we spent the next couple of nights getting used to all the routine responsibilities of new parents. There’s no denying it’s damned hard work, but the rewards just cannot be measured.

I was back on the DJ trail on Saturday 3rd in Watford, and there was little surprise to find the night quiet and lacking in action. Post-New Year’s Eve plus cold weather plus a credit crunch never adds up to a wild night in clubland. There was more of the same on Monday 5th.

I made the observation in ‘Tales From The Flipside’ that the UK music industry pretty much takes a month off from regular activity over the Christmas/ New Year period. Evidence of this came from 7th January onwards, when my e-mail inbox started filling up with a huge influx of new tunes, after remaining inactive for quite a while. My first ‘Just Buggin’ on Wednesday 7th marked my final retrospective on the big JB anthems of ’08. By the following week, I was more than ready to devote a show to all the heavy new tuneage that had been getting stockpiled.

Among gems to go straight in my DJ chart were Eminem’s return with ‘Crack A Bottle’, Jay-Z and Santogold’s ‘Brooklyn Go Hard’ and Rihanna and Chris Brown’s ‘Bad Girl’. Less impressive was Flo Rida’s disgusting ‘Round Round’, horrifically based around the hook of Dead Or Alive’s 80s pop hit ‘You Spin Me Round.’ It doesn’t bode well for the state of mainstream so-called ‘R&B’ in ’09! My first radio guest of the month was the Canadian MC Shaun Boothe, responsible for the awesome Unauthorized Biography series. So far, James Brown, Bob Marley and Muhammad Ali have had the treatment. This guy’s a real find. Check him out on-line at www.myspace.com/shaunboothe

You wouldn’t have known it was January from being at The Second Bridge in Bath on Saturday 10th. Far from displaying any seasonal downturn, my Vaults area was absolutely rammed. Kid Fury and Spex cracked me up on the portion of their Phat Club show that I caught while leaving Oxford. A snippet from their conversation went:

Fury: What if, after a couple of years in office, Obama turns out to be just another regular president?
Spex: But he’d still be black…

(By the way, I’ve just discovered Obama has his own Myspace page – how crazy is that? www.myspace.com/barackobama)

The first of two long-awaited European jaunts came on Friday 16th, this one to Zagreb, Croatia. The event brought home just how much additional personal organisation is now going to be needed. Previously, I’d have trotted off to the airport and jumped on a plane without a thought. With a baby now to think about and Parveen currently unable to drive, I first had to take the two of them across to her Mum’s in Aylesbury for a weekend’s lodging.

A crack-of-dawn departure loomed. I’d been laid off from G’s on the Thursday night owing to the January slowdown. In the event, this gave an opportunity to go to bed at 10pm, (the first time I’ve done such a thing since I was about 14,) and get up at 3.30am, with at least a bit of sleep under my belt. The likes of Ryanair and Easyjet have yet to start routes to Zagreb, leaving Hungarian operator Wizzair as the only airline to offer reasonably-priced flights from London. The annoying thing is that they only fly on certain days of the week, and Friday isn’t one of them. So my only option was to leave Luton for Berlin Schoenefeld at 6.30am, then jump on a Germanwings flight to Zagreb. Just a slight delay on the Easyjet flight would have spelt disaster, but thankfully it was on time.

I was back in the Croatian capital to play Maraschino Bar, (Maraschino is a cherry brandy and the national drink of Croatia,) and manager Kreso ran me to my hotel. Straight afterwards I headed into the city to link with Blackout Radio/ Bumsquad DJs affiliate, and all-round Croatian hip-hop kingpin Phat Phillie for lunch, beers and conversation. Items on the agenda included how much we were anticipating the upcoming ‘Notorious’ movie, the extent to which certain high-profile DJs have truly sold their souls to the devil, and how little time it took each of us to do our recent ‘best’ of 2008 reviews!

I played for a mammoth four hours at Maraschino, an intimate and friendly spot that was providing relief from the bitterly cold conditions outside. During my set, a group of girls handed me a slip of paper saying how much they were enjoying the music and asking when I’d be back. It’s moments like this that keep you going in this job, and give a little reminder of just why it is you do what you do. The pictures are now up on Myspace and Facebook, and I recorded my (very eclectic) set, highlights of which are available to listen to via the links in my Myspace blog – www.myspace.com/therealmrkdevlin.

An overnight freeze had set in by Saturday, and I abandoned my sightseeing for the warmth of the hotel pub before being taken back to the airport, this time flying back direct. With no time to waste, I dashed straight from the airport down the M1 to Watford, just in time to play my regular session at Que Pasa. By closing time I was pretty wacked, but had an undisturbed (baby-free!) night of sleep in wait at home. On Sunday, I headed across to pick up Parveen, and with a couple of hours’ baby cover, we went out for a meal and the first bit of proper ‘us’ time in three weeks.

Next on the travel agenda was a two-nighter in Bergen, Norway, in the company of key mover and shaker Teddy Touch. With no direct flights available, I travelled outward with SAS via Copenhagen, and how the hell I made my first flight is something I still can’t quite comprehend. I made the mistake of taking the Underground’s Piccadilly Line to Heathrow Terminal 3. It was so painfully long that it felt like I’d travelled to Mars and back via China. By the time it eventually arrived I was convinced my travel plans were doomed. Incredibly, after some Olympic-standard sprinting, I made it to the plane seconds before the door was slammed shut, and sank, panting, into my seat. Only a reputable airline like SAS would have allowed me to check in 20 minutes before departure. Ryanair? Forget it.

Curiously, SAS is the flag carrier for Norway, Sweden and Denmark, but not Finland, which has it’s own Finnair. On disembarking in Copenhagen, the flight crew said goodbye to all the Danish passengers in their own language, but knew to switch to English for the Brits just by looking at them. I’ve no idea how they achieve this. I clearly can’t pass for a Dane.

Bergen is Norway’s second largest city, and it’s well documented that the country is the most expensive in Europe. Naturally, salaries are generously weighted to offset the cost of living. I remembered a margerita pizza costing the equivalent of £11 on my previous visit in 2003. This time, a cursory glance at a TGI Fridays menu revealed it to have risen to £15, while chargrilled chicken was going for £21, and a beer would set you back a fiver.

I linked with Teddy for dinner during the evening. As a vegetarian, my choices in a country which features reindeer and whale on many a menu were always going to be limited, but we found an appropriate spot. Both gigs had been much anticipated as they carried an ‘anything goes’ music policy, coupled with an open-minded crowd. (They do still exist, even if you have to go to Norway to find them!) Thursday night’s excursion was at the small and friendly Silver. A lot of reggae and hip hop got spun, and I went back to back with Teddy for the last portion of the night as we vibed off each other’s tune selection.

The high-speed wi-fi in my hotel room enabled me to download 40 or so tunes during Friday, as well as post the previous night’s pictures on-line. The second gig was Teddy’s well-established Soul City session at Café Opera. Norwegians hit clubs late; alcohol is so pricey that revellers have their own pre-parties at home, only going out when they’re already drunk. By 12.30 the place was packed, and a stunning hip hop-flavoured soundtrack got spun. I recorded both mine and Teddy’s sets, which are now available for download. Sadly, by 2.45 the night had come to an end. All Bergen’s venues must now close by this time in an effort to curb late-night antisocial behaviour. It never really worked in the UK.

I debated whether it was actually worth going to bed, with one of those famous crack-of-dawn flights home on Saturday, this time routing via Oslo. With Parveen and Zaina away, it meant I could spend the afternoon sleeping before setting off for the weekend’s final gig at The Bridge in Oxford.

… and that was January.