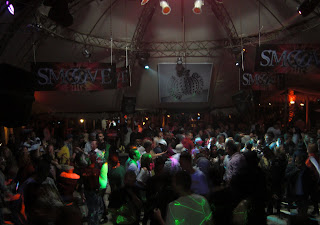 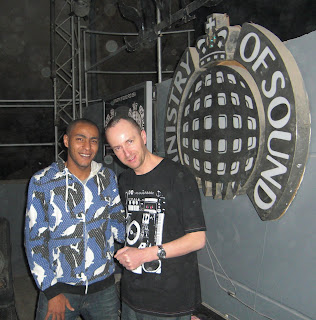 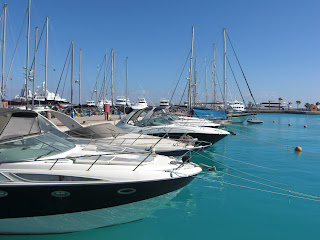 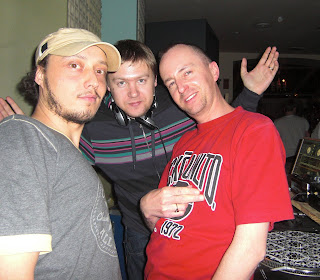 First job of the month was the completion of 2009 Bangers – all the big tunes of the year in three quickfire mixes. This year’s were harder than ever to classify, given the continuing divergence of different genres. The R&B/ Urban House and Hip Hop mixes are only loose labels for what they contain, therefore, whereas the UK Funky one does what it says on the label. This is the one I most enjoyed putting together, and is likely to be of the most interest to overseas heads keen to get a grip on the sound that ruled UK and holiday resort dancefloors this Summer. I’m giving out CD copies at my gigs, but they’re otherwise available to download on the following links, (with full track listing available in the 2009 Bangers story on the main blog.)

Incidentally, my thoughts on the blurring of the boundaries between what were previously thought of as ‘urban’ and ‘dance’ music are the basis of a feature I wrote recently for the Rivmixx music industry networking site, (http://www.rivmixx.com)
There’s comments in there from DJ Semtex, Maurice of Soul II Streets and Stuckee of the Play Centre music promo companies. You can read it here.

I completed a long run of artist interviews on my radio show by way a phone chat with Raekwon at the start of the month.
The Wu Tang legend was a highly courteous gent to catch to, on his way to pick up his son in New York as I kicked it to him on the cellphone. A far cry from the manic persona portrayed on track. Among other points, I asked him about the origin of the name Raekwon and his nickname of ‘The Chef.’ The interview’s been posted on Black Sheep Magazine, which you can listen to here

On to the first weekend of the year, and this consisted of my first three Christmas sessions DJing at Trinity, a newly-opened venue in my hometown of Bicester. The spot is primarily a restaurant, tea room and bar, but also has an upstairs function room. Through December, there are several corporate and private group booking for evening meals, after which the punters are herded upstairs to dance off the calories. As a result, the crowds I was playing to clearly weren’t regular clubbers, and would have been unfamiliar with anything too upfront or specialist. The solution was to dig out a whole load of Motown stompers, Atlantic soul classics, 70s disco, plenty of James Brown and Michael Jackson and a bit of Bob Marley. Everything remained loosely rooted in black music, which avoided things being too musically painful, whilst still getting punters aged 50 and above dancing.

It’s always a useful experience for a DJ to step outside of their comfort zone and play styles they normally don’t to crowds they wouldn’t normally encounter. It keeps you sharp and is the test of a DJ’s real versatlity. Kicking off a mad second weekend of December, I had one of these lined up in Riga, Latvia.

The Ryanair flight out cost less than the diesel used getting to Stansted. The downside was that it left at 6am, causing me the hardship of having to leave my warm bed and warm wife at 2.30am. Leaving behind the bombsite of a house caused by my 11-month-old daughter, I used the journey to catch up on a batch of new CD listening.

Riga was a dark and drizzly 3 degrees as I bussed it in from the airport, and I spent a good part of the day catching up on sleep, before linking in the evening with DJ Green, a hip-hop/ reggae DJ who also teaches mixing skills at Riga’s Rhythm Institute. Whereas my hotel was in the distinctly Eastern Bloc-looking part of the city, we met in the charming and tourist-friendly Old Town, where a traditional Christmas market was in effect. Green mentioned his plans to relocate to London as soon as possible, and we discussed the potential difficulties of finding any DJ work there, given that the market is already saturated with young contenders. The potato pancakes and hot fruit punch set me up nicely for the gig.

The venue was Piens which, despite being an anagram of ‘penis’, means ‘milk’ in Latvian. I span alongside DJ Ai-Va, who had just that evening returned from a tour of the US, and must have been jetlagged the f*ck out! The musical guidelines for the night were that it should be a soul/ funk/ disco session, with a little indie, but definitely no cheese or pop. I took up the challenge willingly, pulling out another set that was far different from the usual fare. It was great fun. I recorded the whole session, and the download link will be available via the blog very soon.

Friday 11th was an exhausting one. After an early departure back to the airport I arrived home mid-afternoon, programming in a catch-up nap among prep for the weekend’s remaining trip. In the evening, I set off for another de-bloating workout at Trinity, before managing just 90 minutes sleep at home, then another crack-of-dawn departure for the airport.

On the schedule was a very welcome return to Egypt to play at Ministry Of Sound on the Red Sea coast of Hurghada. My gig there in July was undoubtedly the best of the year, and the opportunity for 48 hours of sun in drizzly December was highly appreciated.

The only direct flights from the UK to Hurghada are with Easyjet and Thomas Cook, and neither fly on a Saturday. The only manageable-cost option was to route via Stuttgart, Germany, flying out of Heathrow with BA, then connecting with the German holiday operator Condor. I arrived into an already pitch-black Egypt at 5.45pm. and soon afterwards linked with promoter Owen for a bite and a beer at The Lodge. This is one of a handful of venues in Hurghada’s Sekalla district owned by the same British/ Dutch partnership that has the franchise to trade under both the Ministry Of Sound and Hed Kandi brands in the area.

MOS at Papas Beach Club had been fully open-air in July. For the more nippy Winter nights, they’d encased the venue in a marquee-type arrangement, with added door frames. Belfast’s DJ Ghost had played a couple of weeks before and and had warned me to take a jacket as the Winter nights are chilly. I found it quite reasonable in just a T-shirt.

The gig was as jumping and full-on as I knew it would be, and I had the time of my life dropping bombs between 1.30 and 4am. Gucci Mane and Usher’s ‘Spotlight’ particularly destroyed it. I generally find myself working through a few weeks of routine, run of the mill gigs before a great one like this pops up. When it does, it makes the whole idea of doing this job entirely worthwhile.

With my flight home not until Monday, this left me with the whole of Sunday to chill in the resort. Heading for poolside cocktails at the nearby Hed Kandi beach bar, the air was being filled with calls to prayer from three different mosque minarets clashing in the atmosphere, making for a highly surreal setting. I asked what Christmas is like in Egypt. Being a muslim country, 25th December is just a regular day for the locals, although the European and American expats there tend to get together for a traditional Christmas dinner. Egypt has 7th January as a public holiday – seemingly their version of New Year’s Day.

In the evening, I ate out with Cardiff-based DJ Sarah Louise, who’d been spinning at the Hed Kandi venue while I was at Ministry. We talked about DJing chores back home, where she revealed that she routinely works six nights a week, and through December, is doing crushing 3pm-3am shifts. Even half of that is too much for me. We flew back with Easyjet to Gatwick on Monday 14th after rinsing the Duty Free shop for cheap vodka (for me,) perfume (for Wifey) and fags (for the mother-in-law.)