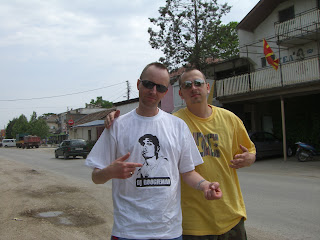 Like many of the other Balkan states, the Former Yugoslav Republic of Macedonia, (to give its full and officious title,) has yet to adapt itself to the tourism market. Following the closure of the one at Ohrid, the country has only one airport, all flights there are unfeasibly expensive, and there are no direct routes there from anywhere in the UK. It’s a shame, as it’s a stunningly beautiful country, and the people are the friendliest you could hope to meet.

My second visit started on Saturday 16th, and, as with the previous occasion, involved flying to Sofia in neighbouring Bulgaria, then being driven over the border as the only way of keeping costs at a vaguely sensible level. Unfortunately, British Airways only operates one flight a day from Heathrow, and it’s at the ungodly hour (if you’re a DJ) of 8.30am. As I’d worked on Friday night in Watford, there was barely time for a snatched three hours of sleep before heading off to the airport. On the flight, I heard the two guys sat behind me exchanging music talk. They turned out to be the electronic music duo Spooky, headed to a gig in Sofia that night alongside Sasha, (who used to be famous for failing to show up for bookings, but has apparently cleaned up his act in recent years.) Naturally I attempted to flog them both a copy of ‘Tales From The Flipside.’

The day was to become possibly the longest period of unbroken travel I’ve experienced yet. At Sofia, I was picked up by Radina and Shosho to begin the long road trip. The guards at the border were clearly more interested in eating doughnuts, scratching their arses and lazily swatting at flies than checking passports. In the end it took five hours to get to the Macedonian capital of Skopje where we picked up the country’s key player, DJ Boogieman and his manager Danny Boy. It’s a wonder Shosho’s spine wasn’t permanently bent at 90 degrees following another three hours at the wheel to the South-Western city of Bitola.

There was ample time to get the usual history and statistics en route; Macedonia’s entire population is only two million, a quarter that of Greater London. A large portion is made up of ethnic Albanians, and the country shares its language and cyrillic alphabet with Bulgaria, with which it used to be joined in the decades before Europe’s borders were re-carved. Right, lecture over. And there’s no love lost between Macedonians and Greeks, following centuries of territorial disputes.

By the time we eventually rolled into Bitola I was delirious from lack of sleep, and staggered, red-eyed, to Rascekor nightclub with the others. I span alongside Boogieman, as the familiar DJing adrenalin (and Red Bull) kicked in. We span from a highly dangerous DJ crow’s nest accessible only by fire ladder, from where we had an excellent view of the VIP balcony, where the party was definitely going on. A great night, and worth the road miles – just.

Somehow we all managed to make our hotel breakfast before cramming in the motor headed back to Skopje. The mountainous scenery was truly mindblowing and reminiscent of Glencoe in the Scottish Highlands. Danny’s day job is as a chef in an Italian restaurant, and he cooked us all a spectacular meal that was enough to get even a non-foodie like me excited.

A blessed hotel disco nap followed with the AC on full blast, before Sunday night’s gig instalment at Hard Rock Club, one of Skopje’s best-known venues. My set was hugely enjoyable, the crowd responding nicely to the hip hop selection, without much need to go down the poppy commercial route. My two hours zipped by in a flash.
Sadly, so did the two hours of sleep before the rudely early pick-up and plod back to Sofia, and then on to Heathrow, (mother-in-law’s statutory Duty Free fag order in hand, of course). I always appreciate the opportunity to visit places that are off the usual DJ gig trail, and the parties generally turn out to be hugely satisfying as a result. Hopefully this won’t be my last visit to this particular location this year.