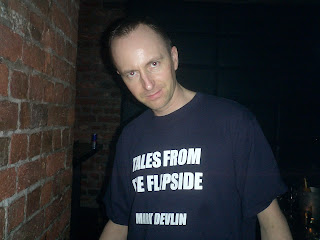 The first weekend in March was to have marked my return to South Africa, a territory I used to play regularly. Regrettably, the planned gig schedule still hadn’t been confirmed by Monday 2nd, so I was forced to (very reluctantly) cancel. I didn’t take it too personally. It’s three years since I was last there, I haven’t provided my mixes to national Metro FM for a while, (always a great method of promotion,) and the balance of clubland power has shifted since my last visit.

So on Wednesday, I took Parveen and Zaina on a day trip to the South Coast. Southampton and Portsmouth weren’t quite the same as Johannesburg and Port Elizabeth, but we enjoyed the time nevertheless. The following day was Parveen’s birthday, and there was always going to be a price to pay for being away on such an occasion, so I saved face on that one. The night marked my second slot at Izi in Witney, where my folks live, so leaving Z with her gran, we managed to persuade my Dad to join us for a couple of drinks, marking the first time he’s ever witnessed his boy DJing. He might have been just being polite, but he tells us he quite enjoyed the tunes. And the table-bound dancing was something to behold. I’ve now had both my pops and mother-in-law along to gigs, which might not be the coolest thing to admit to, but they were good experiences all the same!

With me in the booth all night was a representative of the PRS. The organisation does random audits of nightlife venues, and this was the second time one had fallen on my particular night. The guy looked more like an accountant than a muso, so I’m not sure how much his list of tunes played made sense at the end of it all.

The re-scheduled weekend was completed with Watford on Friday and Bath on Saturday.

Parveen is a lifelong Michael Jackson fan to an almost obsessive degree, so her excitement levels when Wacko announced his series of summer dates at the 02 Arena could not be measured. While I was still sleeping off my gig, she set the alarm for early on Friday 13th to try and grab a pair of tickets from the on-line ‘sale.’ When midday had come and the site advised that all regular tickets had ‘sold out’, it was clear a scam was underway. Especially when punters were still being offered ‘VIP Thriller packages’ at £790 a pop. Seemingly, these just consisted of a champagne reception, a few souvenirs and a ringside seat. I suspect they’re called ‘Thriller’ packages because the credit card bill will scare you to death when it arrives.

Personally, I think it’s doubtful that any of the shows will go ahead, let alone the whole series of 50, and the whole thing has been an exercise in relieving a lot of excited people of a hell of a lot of money. While Wacko himself probably isn’t knowingly involved in any deceitful activity, he’s become surrounded by an army of crooks eager to exploit his naivety. Anyway, we shall see. I got called on to spin at Mood in Oxford later that night, and left a very hacked off Mrs D as I went off to work.

On a vaguely related note, the following conversation took place in Watford on Saturday night:
Punter: Can you play something by Michael Jackson from when he was black and sane?
Me: Not sure I’ve got anything from that far back.

Nostalgia was firmly on the agenda during the week. After spending a highly enjoyable session replenishing my iTunes archives with some 80s indie, pop and electro, (everyone from The Smiths and Siouxsie & The Banshees to Doug E Fresh and Grandmaster Flash,) I moved on to some archive radio tape ripping.

While most folks’ garages are occupied by lawnmowers and ladders, mine houses my extensive cassette archives – hundreds of ’em going back to the 80s. Among the selection are many radio recordings from my youth, and nestling among the Gary Davies and Bruno Brookes Radio 1 Top 40s are a whole load of specialist black/ urban/ dance shows from the late 80s and early 90s. These include Robbie Vincent’s soulful Sound Of Sunday Night and Jeff Young’s Big Beat from Radio 1, (these two preceded Trevor Nelson and Pete Tong by a good few years,) Tong himself from the days when he used to play soul and rap, (so you can tell how old those are!), The Ranking Miss P, (the reggae predecessor to Chris Goldfinger,) and the two legendary 80s hip hop shows on Capital Radio – the dude Mike Allen, (one for the real old school heads,) and later, a young and very different-sounding Westwood.

It’s only right that I put these out there for anyone who remembers these classic times, or anyone else that’s curious to hear how it used to go down. So I’ll be posting up a whole bunch of download links on the main site, on my Blogspot, and in a new Facebook group. Plus, look out for a brief video snippet on the tape ripping process on my Youtube channel – www.youtube.com/markdevlintv. All coming soon, so watch this space.