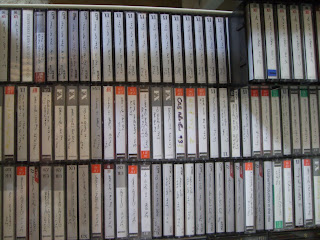 It’s about that time to get busy with some more 80s/ 90s classic radio revivals, freshly exhumed from the archives. One for all the younger cats with an interest in the nostalgic past, just as much as the old-school heads who remember all this good stuff from first time round. (Have to big up Bobby Dazzler for some of these, as they were originally his postings before I jacked ’em. Credit where it’s due.)

Here’s what we’ve got for you this time:

Mike Allen, Capital Radio, Xmas 1985
More from the velvet-voiced original hip hop dude on Capital Radio, repping with his weekly UK Fresh, and later syndicated National Fresh shows, (which ran from 1984-87). Although he sounded more than a little like Alan Freeman, Mike Allen got mad respect and ran things in the 80s, trust.

Robbie Vincent, Radio 1, April 1987
Although Greg Edwards on Capital got equal props from Londoners, Robbie’s show was heard nationwide on Radio One, and was any soul/ funk/ fusion fan’s show of choice. This one, from Spring ’87, is in FM, rather than the flat-quality medium wave of the last post. Great tunes here, from the likes of RJ’s Latest Arrival, (with a topical reference to Ronald Reagan in the lyrics!,) Patrice Rushen, Nona Hendryx, and a snatch of Shirley Murdock’s divine ‘As We Lay’ – TUNE! Robbie also pays a reluctant nod to the growing US house music scene with a play for Kenny Jammin’ Jason and Fast Eddie Smith’s ‘Can U Dance’. Multiple namechecks for the Easter Livewire Soul Weekender at Prestatyn.

Westwood, Capital Rap Show, 5/2/88
The earliest recording of the Capital Rap Show I’ve been able to find – February 1988. (The show only started in October ’87) Anyone got one from even earlier?

Dave Pearce, GLR, 1989
http://www.sendspace.com/file/7tyj8x
It’s hard to believe now, but before he turned into the middle aged beer-gutted cheesy trancemeister so beloved of I-Beefer chavs that he is now, Dave Pearce was actually a credible hip-hop DJ, with a respected show on BBC Radio London – or Greater London Radio as it was known in 1989. Here’s a showing from that era.

Pete Tong, Capital Radio, 22/12/90 P1
http://www.sendspace.com/file/1wqhen
1990 was a fascinating year for UK music, sitting midway between the acid house explosion, and the homegrown rave and underground house scenes that were just poised to happen. The result was a glut of hybrid records sitting somewhere between hip hop and dance tempos, a lot with reggae bassline influences. Here’s the first of two 1990 year-end round-ups from Pete Tong, who presented his much listened-to Soul Session, (later just The Session,) on Capital from ’87 to ’90. The reception quality dips in a couple of places, but it’s wonder enough I was able to record a London-only station at all in the depths of West Oxfordshire! This turned out to be Tong’s penultimate show for the station. Two weeks later he’d present the very first Essential Selection on Radio 1. We’ve got the audio from that next time round.

Max & Dave, Kiss FM, 19/3/91 P1
These two made up the Hardrock Soul Movement, a 1980s UK hip hop crew, and put out a number of underground joints before taking on a weekly show on Kiss FM. At this time, Londoners chose between DJ 279 on Choice, Westwood on Capital, or Max & Dave on Kiss for their regular flava fix.

Funkmaster Flex, Hot 97 New York, 16/4/93
Flex ruled the New York airwaves in the early to mid-90s with his nightly shows on Hot 97. Here’s a Friday Night Flavas mixshow instalment from a random date in ’93, which serves as a great example of the criminally good hip-hop that was still being turned out in that year.

Mark Tonderai, Radio 1 1993, P1
Who was the first urban/ hip hop DJ on Radio 1? If you discount Robbie Vincent, Jeff Young and Pete Tong, who only used to play the occasional rap record, then it was the long-forgotten Mark Tonderai. He used to rock late-night Fridays and Saturdays zoo radio-style, featuring a strong line in comedy skits, (remember the old man called Deuteronomy?,) and interactive DJ mixes. He was neatly dethroned by Westwood within a few weeks of his arrival and, as far as I know, left radio altogether for TV and film. Here’s a couple of random shows from circa 1993. More to follow next time.

Graham Gold, The Promised Land, Fox FM, 15/10/93 P1
Nothing urban here. One for the house heads instead. This is the show that I tech-opped all through 1993, broadcast live on Fox FM from The Park End Club in Oxford. At the time, transmitting live from a club was still quite a revolutionary idea. Some great quirky, funky house music from the time, if that’s your bag.

Lashes Degree Ragga Mix, Galaxy 101, Jul 98
http://www.sendspace.com/file/r1qcv8
A sample from the latter days of my Swing Shift show on Galaxy 101. Bristol DJ Lashes Degree used to drop a wicked ragga selection, (as reggae dancehall was known back in the day.) Here he is with a classic Summer ’98 set, getting ready for that weekend’s St. Paul’s Carnival.