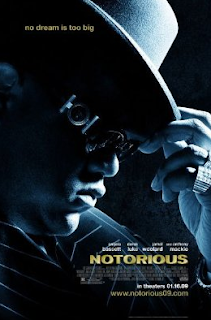 The biggest challenge facing director George L Tillman Jr’s biopic of the late great rapper Biggie Smalls was to make it palatable to non hip-hop diehards. Not an impossible feat; ‘Ray’, for instance, told the Ray Charles story to a wide and varied audience. Although the elements of hip-hop culture on display may be alienating to non-followers – the dialogue isn’t something you’d want to recite over tea with the vicar – ‘Notorious’ has enough cinematic devices to satisfy the demands of most movie-goers – a rags-to-riches tale, romance, sex, drama, violence, and, at the centre of it all, a deadly rivalry, in this case between Biggie and fellow slain rapper Tupac Shakur.

Although lacking any facial similarity, newcomer Jamal Woolard’s imposing frame gives the central character plausibility, and strong support comes from Naturi Naughton as Big’s protégée and occasional lover, Lil Kim. Derek Luke’s performance as super-producer Sean ‘Puffy’ Combs, however, seems way off-track, not least because he bears no visible similarity to the real-life subject. Antonique Smith plays the other woman in Big’s life, his widow, the singer Faith Evans, with Angela Bassett the only familiar performer, playing the rapper’s mother.

While hip-hop fans will relish seeing the story of Biggie’s short time at the top acted out, the screenplay glosses over certain more controversial issues, crucially, the real reason the rapper died in a hail of bullets in March 1997 and who could have been behind it. Similarly, Woolard’s portrayal only really scratches the surface of what really made Christopher Wallace/ Biggie tick, and such sanitisation may well be down to the fact that the movie was sanctioned by Wallace’’s mother Voletta, and Sean ‘Puffy’ Combs as producer and executive producer respectively.

What certainly aids the film is its fast moving pace and its hugely moving ending. ‘Notorious’ emerges as an exciting and tragic account of a man who was, to many, the best that ever did it.

GIRLS DANCE ON THE BAR AT SOUL CITY, IBIZA, SUMMER 2012