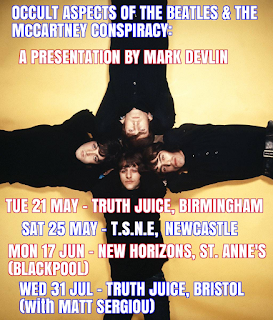 I’ll be taking a new presentation on occult aspects of The Beatles, incorporating the McCartney Deception, on the road for four UK dates in the near future. Matt Sergiou, proprietor of the Occult Beatles and Conspiro Media blog sites, will be joining me for the Bristol date. Full details as below.
OCCULT ASPECTS OF THE BEATLES & THE McCARTNEY CONSPIRACY: A PRESENTATION BY MARK DEVLIN
Were the Beatles really four regular lads from Liverpool who, against all the odds, just happened to become the most popular and influential group of all time? Or is there more to know about how they achieved their fame, and what their ultimate role really was at the hands of the occult practitioners who really control the corporate music industry?
On that note, one of the most enduring ‘conspiracy theories’ maintains that the real Paul McCartney died in 1966 and was replaced by an impostor who has been playing the public role ever since. Preposterous as this may at first sound, there is actually multiple forensic evidence to show that, whatever the circumstances, there has been more than one ‘Paul McCartney’ presented to the public these past few decades.
Mark Devlin, whose books Musical Truth Volumes 1 and 2 document the dark side of the music industry, will present the evidence for a switch, and consider the circumstances in which this could have been achieved.
TUESDAY 21ST MAY – TRUTH JUICE, BIRMINGHAM, ENGLAND
Address: E57 Social Club, 699 Alcester Road South, Kings Heath, Birmingham, B14 5EY
Start time: 8pm
Admission:  £5 or £3 Concessions on the door. Truth Juice is non-profit-making, and all monies are put back into the organisation of future talks/presentations
Further info: http://birmingham.truthjuice.co.uk/index.php/2019/03/mark-devlin-in-birmingham-on-210519/
SATURDAY 25TH MAY – TRUTH SEEKERS NORTH EAST, NEWCASTLE
Address: Walkerville Community Association, Pinewood Close, Newcastle, NE6 4SZ
Start time: 1pm
Admission: £5 on the door. (Includes refreshments.)
Further info: https://www.facebook.com/events/2147063715584781/
MONDAY 17TH JUNE – NEW HORIZONS, ST. ANNES, ENGLAND
Address: The Community Centre, St. Alban’s Road, St. Anne’s-on-the-Sea, Lancashire, FY8 1XD
Start time: Open at 7.30pm for 8pm start.
Admission: £3 on the door. (Includes refreshments.)
Further info: http://www.newhorizonsstannes.com/this_year.htm
WEDNESDAY 31ST JULY – TRUTH JUICE, BRISTOL, ENGLAND (WITH MATT SERGIOU.)
Address: Resbite Cafe, 27 Broad Street, BS1 2HG, Bristol
Start time: 7.30pm
Admission: £5 on the door.
Further info: bristol.truthjuice.co.uk
* Matt Sergiou, the proprietor of the Occult Beatles and Conspiro Media blog sites, will also be presenting content at this event.