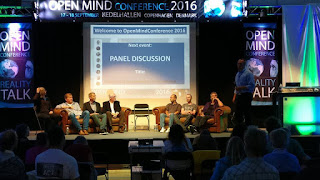 Just back from another awesome Open Mind Conference in Copenhagen, and still buzzing big time. I made the observation that, if the information presented there were to somehow be broadcast on BBC, Fox, CNN or some other such mainstream outlet, the general public would be shocked to the core, would be talking about nothing else the following day, and the NWO stranglehold on humanity would lose its grip immediately. As it is, the organisers reported that the live stream via Gaia TV was being constantly hacked so as to disrupt it. We must have been doing something right, and certain parties must be mighty scared of certain things getting out there. All the more reason to keep right on truckin’!

This event was far more rooted in geo-political/ conspiracy/ “real world” stuff than certain more esoteric events, which, in my view, is just what’s needed right now. Johan Oldenkamp gave a fascinating analysis of numerological links to certain “terror” attacks, Christopher Bollyn and Jens Thor Thygessen gave new overviews of 9/11 and the JFK assassination respectively, and the brilliant Ole Dammegard rounded things off with his assessment of the barrage of false-flag terror hoaxes of this Summer, taking the official stories apart with ease and great black humour, (because sometimes, the only appropriate response to these pathetic, farcical stunts is to show them for what they really are,) and leading the crowd in a song, “We’re so tired of this bullshit, yes we are”, sung to the tune of ‘She’ll Be Coming Round The Mountain When She Comes.”

The crowd showed themselves to be switched-on, compassionate and rightfully-concerned, and it’s such a pleasure to resonate with such like-minded souls for a weekend – a temporary oasis of sanity and reason in a wasteland of madness. Some great discussions, friendships and plans for action made over dinner last night. Big props to the big boss Frank Bjerregaard Rasmussen, Gregg Vardy Carol Coenca, and everyone else involved in organising this highly worthwhile gathering.

The videos should all be available for free on Youtube within a month or so. I’ll post them here as soon as they become available.

MD AT BACK IN THE DAY, SWINDON, SATURDAY 25TH MAY