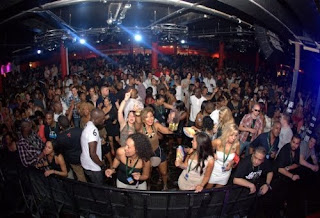 ‘The Minehead Weekender’ just doesn’t have the same ring about it. So the organisers of the legendary Southport, now at its 47th instalment, wisely decided to keep the familiar moniker when they relocated to Somerset for this year’s event. It was a big risk – although Minehead is more geographically convenient for the Southerners who used to moan about the grinding trek up to Merseyside, the winding A39 approach still makes for a fair old whack – especially for Northern folk. By the end of this weekend, however, the overwhelming consensus was that the move had been a great success with the venue, the sprawling Butlins site, a visionary choice.

Boasting a huge central leisure hub, the most obvious benefit was that the regular four rooms of music had each been given extra space, with soulful dance haven The Powerhouse now resembling an Ibiza superclub. The other winning aspect was the line-up. A bit of freshening up had taken place, with one or two old DJ names dropped, a sprinkling of new ones added, and a diverse offering of one-off specials, ranging from Naughty By Nature and Grandmaster Flash, to Beverley Knight and yet another return for Sounds Of Blackness.

The real highlights of Friday night were Roger Sanchez’s excursion into classic house anthems, and a coveted appearance from John ‘Jellybean’ Benitez, a veteran of the New York dance scene, seemingly enjoying a bit of a Greg Wilson-style re-emergence. Over in The Funkbase, there was little disagreement that reggae don David Rodigan ‘murked’ it, (to coin a popular Twitter phase,) indicating that a touch of reggae might well be a strategic move for future events.

Southport is the type of event where a DJ’s entire performance can be judged on one killer tune selection, and JP’s early Saturday set of strictly vinyl 45s included the sublime grooves of Faze One’s ‘Ridin’ High’. Much later, EZ dipped the volume to have hordes of girls singing the lyrics to 702’s ‘You Don’t Know’ in his garage classics set, before Trevor Nelson rounded off proceedings, opting for old-school anthems like Gwen McCrae and Sister Sledge over more contemporary sounds. In The Connoisseurs Corner, Dexter Wansell had been in live performance, delivering covers of the likes of Teddy Pendergrass’s Love TKO’ and The Jones Girls’ ‘Nights Over Egypt.’ Later, DJ Spinna came with some disco-infused rare grooves, but disappointed by playing sat on a stool, looking bored. Was 90 minutes of standing really too much to ask?

My personal highlight was witnessing Kenny ‘Dope’ rocking The Beat Bar with a hugely diverse set of house bangers, finishing with some spine-tingling classics like Marshall Jefferson’s ‘House Music Anthem’, Aly-Us’s ‘Follow Me’ and Sterling Void’s ‘It’s Alright’. The Master At Work had the crowd forgetting all about the fact that it was 6am and they’d been on their feet all night.

If you like the sound of it, be sure to get those bookings in early for Southport 48 in May next year. For fans of soulful grooves, it’s a weekend experience that’s truly hard to beat.

After milling around the CD and T-Shirt sellers on Saturday night, I took a dip into the Connoisseurs Corner to watch a fairly low turnout listen to Kev Beadle’s soulful, jazzy offerings. As atmosphere wasn’t at an apex, I decided to head over to the Beat Bar where Snowboy was offering a Tourettes-driven set, (he cursed like a sailor whilst introducing every track,) which slightly marred the wonderful, eclectic mix of jazz-funk, broken-beat and Brazilian licks, moving a half-filled room. The staff, along with some punters, broke into a few carnival chain dances, to the delight of others watching by or getting down on the dancefloor.

A little while later, soul singer Alice Russell burst onto the stage and belted out some of her tunes, which had a Latin flavour to them, sprinkled with some danceable jazz-funk. There were some musical snob pundits to the left of me who weren’t feeling Alice. I wished they’d shut up, but they didn’t stop me from enjoying proceedings, including some shoulder-shuffling and toe-tapping, all from the comfort of the leather sofa I had co-opted.

It got to 11, and I thought I’d head over to The Funkbase. It wasn’t as full as I was expecting- perhaps the slapped-on flyer for a PA from Beverley Knight hadn’t filtered through the chalets? No matter, there was a nice old-school selection of 80s and 90s R&B and hip-hop. Miss Knight came on stage promptly and played the crowd with a cover of Junior’s ‘Mama Used to Stay’, her cover of Soul II Soul’s “Fairplay” and her first single from 1994. She was UK Queen of soul personified: beautiful, soulful, friendly, warm and talented. The crowd (which had grown in the last hour,) lapped it all up. Off went Beverley and DJ Steve Wren went back to a lovely mix of old school hip-hop including ‘King of the Beats’ by Mantronix and ‘Don’t Scandalize Mine’ by Sugar Bear.

Predictably, by 1am the crowd in the Funkbase had swelled in time for Grandmaster Flash on the Wheels of Steel. A montage of the legend played behind him on video screens, punctuated by Freddy Mercury’s “Flash” vocal sample from the movie of the same name. Laptop computer and turntables were the order of the set, and Flash must have ripped through 150 songs, rocking the crowd and demanding participation through hand waving and reciting lyrics. He took his set to unpredictable places, including a medley of rock anthems from Nirvana and Blur, to old-school hip-hop and 90s anthems, including the bookending of his own ‘White Lines’ and ‘The Message’.

The set went over some of the audience’s heads, but all in all, it was a compelling ass-moving selection that brought back memories. I’m still not sure that segwaying tracks through scratching makes the turntable a stand-alone instrument, but that’s a small quibble as the energy levels were high, and the crowd appreciated the effort Flash had made and the choices he took. No mean feat given an often-hard-to-please crowd like those at Southport.

I headed over to the Connoisseurs Corner once again to catch DJ Spinna playing a nice mix of disco and rare groove. He sat down in the booth. At that hour of the morning, I couldn’t blame him.

It was my first Southport Weekender and I really enjoyed the culture of the whole event, and all kinds of people vibing in several rooms, all there as music lovers and party groovers. Perhaps I should have paced myself a bit better, but Grandmaster Flash will be a highlight in the memory bank for the the future, for sure.

For further information and future bookings, go to http://www.southportweekender.co.uk

TALES FROM THE FLIPSIDE – THE IDEAL CHRISTMAS PRESENT FOR DJs!