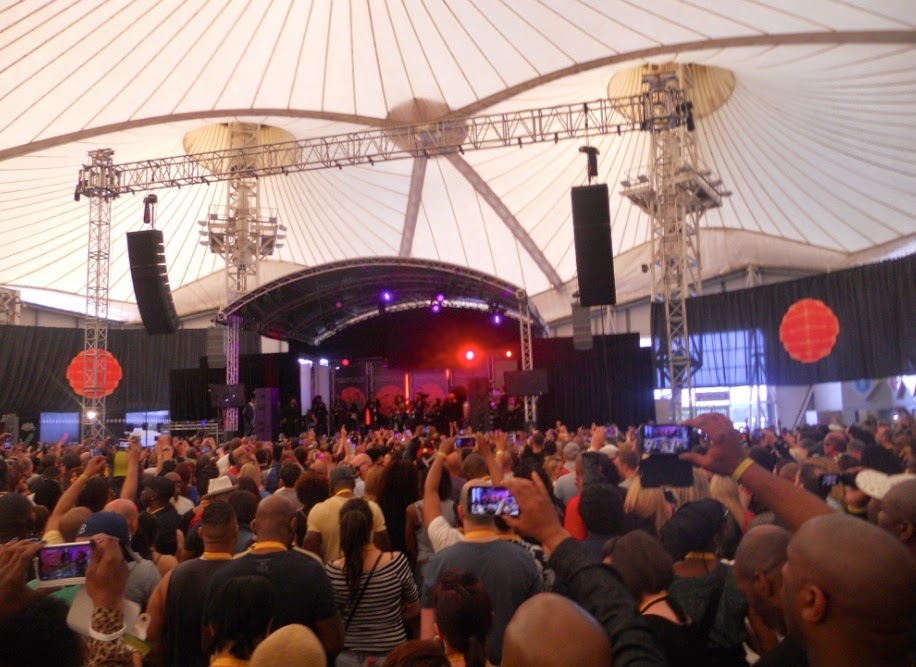 Here’s my review of last week’s outstanding Southport Weekender, from http://www.blacksheepmag.com
Southport Weekender 50
Butlins Complex, Minehead, 9th-11th May 2014
Although long departed from the location which spawned its iconic name, the crew behind The Southport Weekender pulled out all the stops at their new home of Minehead to create a truly memorable 50th event. The amount of specially-constructed domes and other peripheral venues besides the main four arenas, became as expansive as the list of live acts and DJs themselves, giving several thousand committed punters a three-day experience that so many of them look forward to all year, and book a few days of recovery time off work for appropriately!
Heading up the live acts this year was Chaka Khan, who packed out the central concert area on Saturday evening, belting out powerhouse vocals, and both sounding and looking in complete defiance of her sixty-plus years. She was joined by Brit-funk legends Incognito for the occasion. Earlier in the day the crowd in the Connoissers Corner, (which had swapped places with The Beat Bar)  had been treated to a show from an act that goes back even further. Archie Bell, into his 70s, alongside his Drells showed they could still dance just as good as they walked, finishing their hour with a fondly received version of their 1968 ‘Tighten Up’. A couple of Southport favourites, meanwhile, gave solid performances on the Friday and Saturday night. The Brand New Heavies performed everything from ‘Midnight At The Oasis’ to a couple of cuts from their new LP ‘Forward’, while Omar, a man whose haircut has survived for as long as ‘There’s Nothing Like This’, graced the same Funkbase stage that Dwele had a year earlier. The following night, it was home to a half-hour performance from Faith Evans, delivering all the expected singalong hits.
When it comes to DJ sets, The Funkbase is the natural home for us here at Black Sheep. This is the most diverse of the arenas, spanning everything from reggae and hip hop, to soul and disco classics, garage, jungle and D&B. Here, EZ absolutely murdered it with an afternoon garage set, blowing the crowd’s minds with his spinback and chopping talents on the Pioneer CDJs, and making it feel more like 3am than 3pm. Equally spellbinding was Mr. Thing, cutting and flitting through hip-hop bangers with mad skills in a joyous two-hour excursion. On Saturday night, JP drifted into a similar sequence, pulling many a 90s boom-bap slammer out of the bag.
This paved the way for the man, the myth, the enigma that is David Rodigan, an absolute sensation at last year’s event, and back to add the reggae dancehall element once again. In spite of his 63 years, Rodigan leapt about the stage like a man possessed, coaxing and gesticulating towards the crowd as he tore through a tightly prepared selection. Rodigan used to be an actor, and it showed. He controlled the stage like a Shakespearean thespian. Shortee Blitz took up the mantle straight afterwards with a sequence of furious mid-90s jungle. Southport first-timers E Double Dee and Martin In Full Swing with MC JNR did a marvellous job of getting the room bubbling on Friday and Saturday night respectively, and it just wouldn’t be Southport without the familiar triple-act of Ronnie Herel, Bigger and Steve Wren dropping feel-good favourites like ‘Happy People’ and ‘You Are My Starship’. An electric slide to Cameo’s ‘Candy’ is equally mandatory.
Black Sheep did go wandering into the other DJ arenas, of course, catching Carl Cox and Kenny Dope going back to their roots with soul and disco crate diggers, and a host of names from Terry Hunter to Kerri Chandler handling the deep and soulful house business in the monumentally-sized Powerhouse.
For any enhusiast of black dance music in any of its forms, it’s hard to imagine how the line-up, the family-feel camaraderie, or the stunningly spacious venue could ever be bettered. Southport achieved ‘legendary’ status long ago, and last weekend, a few thousand punters were reminded of just why.
Bookings are now being taken for next year’s Weekender, running from 8th to 10th May 2015.
The Southport Weekender team also runs the Suncebeat open-air festival in Croatia from 23rd to 30th July 2014, at The Garden Tisno near Zadar.
There’s also a Heritage Weekender back at the original home of Pontins in Southport, Merseyside, from 18th to 20th October.
Full details of all of the above are available at www.southportweekender.co.uk, or www.suncebeat.com

THE SOUND OF FREEDOM, SHOW 28