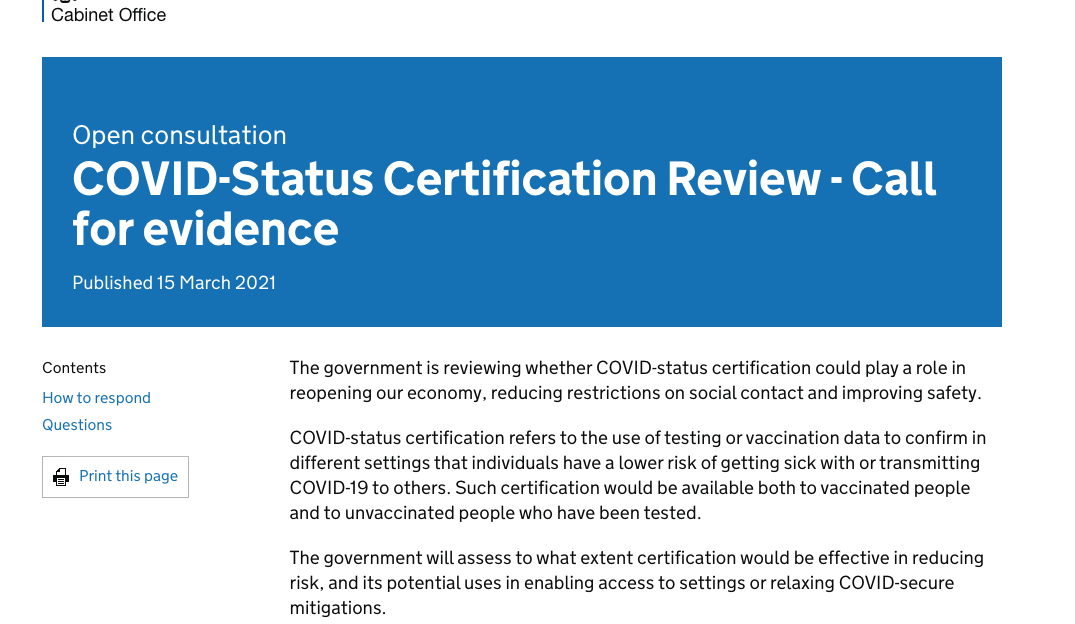 Passing this on (and could you forward to others on your list):

On Monday Parliament debated the issue of vaccine passports in response to the petition which gained 290,000 signatures.

However, the Government has decided as the next step to issue a Call For Evidence. It is a sort of public consultation which anyone can participate in.

The full title is: Open Consultation. COVID Status Certification Review Call For Evidence It is vital that as many people as possible tell the Government why vaccine certificates are a bad idea.

If all the petition signatories did this we would overwhelm their system and we might frighten them into having second thoughts.

To do this you need to go to the link below and submit your comments.

Please try to get as many people involved as you can as quickly as you can.

You don’t need to write reams just think of some bullet points which matter to you and submit them ASAP If you have any good links to articles about the implications for health freedom and privacy or any other evidence you feel is important then submit it too.

Your opinion matters so speak up. It does not matter that you are an ordinary person, you don’t need any specialist knowledge. This will impact you and your family. Tell them how it will effect you negatively.

If we are ever going to be able to get on a plane again without the necessity of being jabbed like a guinea pig with an experimental vaccine which is being shown to have a higher level of harm to it than covid itself and risking our own health as a result, losing sovereignty over our bodies and our rights to make informed decisions which the State respects, being forced to do something which is against common sense, good science and public health and safety we are going to have to fight for it.  Because it won’t stop here – going to the theatre, football match or cinema will also require a passport.  Even shopping – who knows!  To give up our right to basic freedom of movement is a huge thing to hand over willingly.  And there will be no going back.