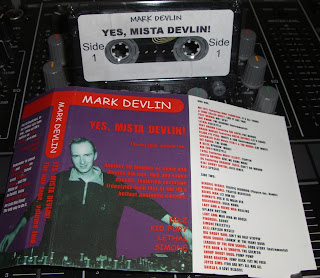 Yes folks, It’s about that time. We’re on to volume two in the reloaded MD mixtape series.

‘Yes Mista Devlin’ first appeared in January 1999, and was the first to feature the exclusive freestyles that were to become a staple ingredient of future volumes. We kicked off with four of ‘em – a debut showing from from a very young Kid Fury, (who was rolling with me to clubs as my MC at the time,) an even younger Lethal, Simone from Nottingham’s Out Of Da Ville crew, (still going strong today under the moniker of C-Mone,) and Kelz of Bristol’s 3PM Crew, a frequent character on my Galaxy 101 Swing Shift show of the time.

Even more entertaining from a personal point of view was the appearance of the first of my comedy skits, this one being the notorious ‘Antonio’ sequence to introduce Kid Fury’s freestyle. Pure comedy, and actually sounding even more hilarious now it’s been cleaned up for radio!

Side two plays out with a couple of 80s electro revivals – Dhar Braxton and Joyce Sims – that I remember playing just before 7am at my first (and only!) DJing appearance at the world famous Southport weekender. (Fate is a strange thing – my future wife was in the room at the time, but we didn’t actually meet until over a year later!)

These were the days of inside liner notes, too. This one featured MD’s big-ups and disses, with ‘people who think your life doesn’t matter if you don’t live in London’ appearing in the latter.
Pure nostalgia, great memories and some cracking music.
Download and absorb.

In the meantime, a reminder that you can still download volume one, ‘Take It To The Streets’, right here:

Take It To The Streets, side 1

Take It To The Streets, side 2